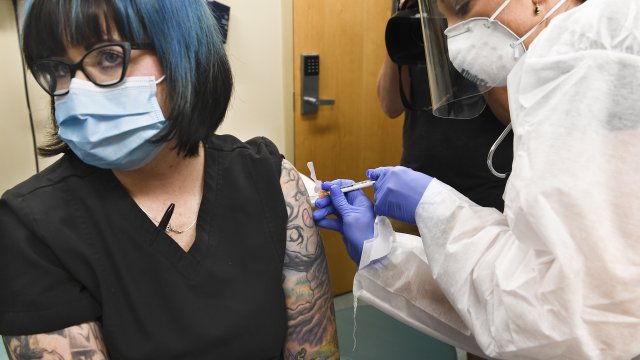 “You know, we've never really seen anything like this. And to be able to be part of, you know, hopefully finding a vaccine for it is huge," study participant Melissa Harting said as she got her shot at Meridian Clinical Research in Binghamton, New York.

What can those test subject’s expect? Ask Neal Browning.

Browning was part of Moderna’s Phase 1 COVID-19 vaccine trial. In March, he rolled up his sleeve as one of 45 original participants. When asked what made him want to participate in this trial, he answered:

"Well, I felt that the risks seemed minimal compared to all the research and the data that I was given and the questions that I'd asked and had answered, coupled with discussing it with my fiancee and mom, who were both in the medical industry," he said.

In that initial study, researchers tested the shot on healthy participants to make sure what dose is safe and doesn’t have serious side effects. From there, the drugmaker's next phases of clinical trials test more people to learn more about side effects in other age groups.

"It's probably one of the reasons this is a two-dose vaccine, because we clearly want to protect older people and people who are frail with chronic underlying illnesses. Very important that the vaccine work in those populations," Dr. William Schaffner, a professor in the division of preventive medicine and infectious disease at Vanderbilt University, said.

If someone signs up for the trial, they’ll be tested at one of 89 clinical research sites in the U.S., and get two shots — an initial vaccine and a booster 28 days later. They'll get either a placebo or a 100 microgram dose of something called Messenger RNA.

"They take normal human cells that would normally be produced in my body. And the RNA is given a set of instructions to the handful of cells to build spike proteins on the outside of the cell. When it's made to mimic and look just like COVID-19," Browning said. "The idea is the body will see this as an invader, even though it's one of my cells. It will have an amino response and it will start learning to build T cells, antibodies and how to surround the cell and allow white blood cells to then capture and destroy them."

Browning got two shots — a low dose of the initial Messenger RNA vaccine and a booster four weeks later. He did daily symptom journaling and temperature checks, and he goes in for an occasional blood draw to see if there are side effects. He’s got three more to go. So far, he says he hasn’t had any side effects.

"My upper arm at the injection site was very slightly sore, but honestly, it was not nearly the soreness I've felt before and getting other immunizations and flu shots," he said.

The Moderna/NIH vaccine is one of 25 in clinical trials around the world. Some experts anticipate if everything goes right, the results of these Moderna trials would come out sometime in the first quarter of 2021, which differs from the NIH’s timeline of having a vaccine by the end of 2020.

"These vaccines have been fast-tracked so it is a shorter time frame than would be for a regular vaccine. But we still need to make sure that the vaccine is going to be safe and effective," said Dr. Frank Eder, Principal Investigator at Meridian Clinical Research.