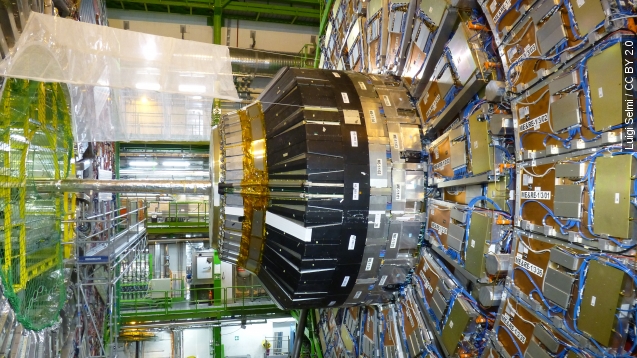 With some fanfare and a whole lot of scientists on hand, CERN's Large Hadron Collider officially began its second run Wednesday, approaching a feat more than 20 years in the making.

The collider, famous for such headlines as the discovery of the Higgs boson and the conspiracy theory about a black hole apocalypse, was shut down in early 2013 to allow for a long series of upgrades.

The work involved painstakingly reinforcing thousands of small but important pieces of the 17-mile engineering marvel, with the effect of making the LHC almost two thirds more powerful than it was in its first run.

The extra energy means that the world's most powerful atom smasher can now smash atoms harder than ever before, and now that the data is officially flowing, physicists around the world are excited to see what the LHC uncovers.

You see, for all the waves the Higgs boson discovery made, scientifically speaking, it was a little boring. Physicists were already all but certain that the Higgs existed and knew pretty much what it looked like. Being spot on is nice and all, but there wasn't much room to learn something new.

The second run is a different story. There's no one thing physicists are out to find at the LHC. Instead, they're hoping for something completely novel to appear, anything that helps deepens humanity's understanding of the universe.

CERN spokesperson Dave Charlton told the BBC in January: "We don't know, really, what new physics we're going to find when we switch on again. It's really a pure science endeavor."

It's also important to point out that, even with the upgrades, the LHC hasn't yet reached its full potential. From the project's early approval in 1994, it was intended to handle energies about eight percent higher than it's using right now.

CERN explains the decision to start the machine before it was at full strength on its website, saying, thanks to some unexpected technical difficulties, it would have taken too long to eek out the extra power. But it's still possible the LHC could become even stronger at a later date.