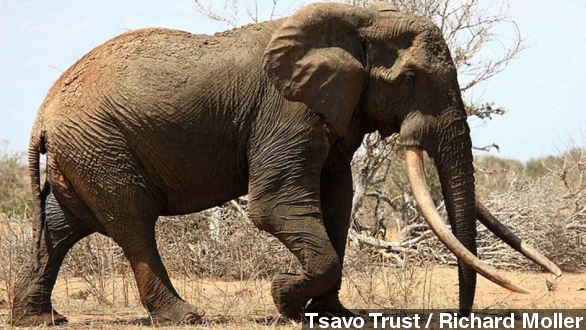 By Christian Bryant
June 14, 2014
Satao was reportedly one of the world's largest elephants and had tusks that almost touched the ground. It is believed he was killed by poachers.
SHOW TRANSCRIPT

Conservationists and others are mourning the loss of one of world's largest elephants, who was reportedly killed and mutilated by poachers.

The carcass of a nearly 50-year-old tusker known as Satao was found in the Tsavo East National Park, one of Kenya's oldest and largest parks. Satao was known as a tusker because his huge tusks nearly reached the ground. (Via Southern Cross Safaris)

The Tsavo Trust, a Kenyan non-profit organization that supports and protects wildlife, said in a statement, "Satao was shot dead ... killed by an ivory poacher’s poisoned arrow to feed the seemingly insatiable demand for ivory in far off countries." The Tsavo Trust includes gruesome pictures of Satao's carcass slumped over in the mud with his face and tusks missing.

Satao's carcass was found May 30, but the Tsavo Trust said it withheld the news of the popular elephant's death-by-poaching until it could identify the remains.

A Guardian reporter said Satao had survived a previous attack by poachers earlier in the year. Veterinarians confirmed that seeping wounds in the elephant's flank had come from arrows, most likely meant to take the tusker down.

Some of the in-memoriam pieces on Satao almost read like an obituary for a human. They describe an elephant as an "icon" who was self-aware, knowing that the tusks that made him popular to observers also made him a target to poachers. NPR reports he might've been one of a dozen left in Kenya.

Wildlife filmmaker Mark Deeble wrote about his encounter with Satao and how the huge elephant attempted to hide behind bushes. He wrote "[Satao] wasn’t trying to hide his body, he was hiding his tusks. At once, I was incredibly impressed, and incredibly sad."

A writer for Mashable says Satao's death punctuates an ongoing poaching problem. He cites a report from the Convention on International Trade in Endangered Species of Wild Fauna and Flora that says more than 20,000 elephants were killed in Africa last year.

That's mainly because "The street value of elephant ivory is now greater than gold, running to tens of thousands of pounds per tusk," according to a writer at The Telegraph.

But there is some good news. The Tsavo Trust said Satao's genes have most likely survived within the park's elephant population through his offspring.