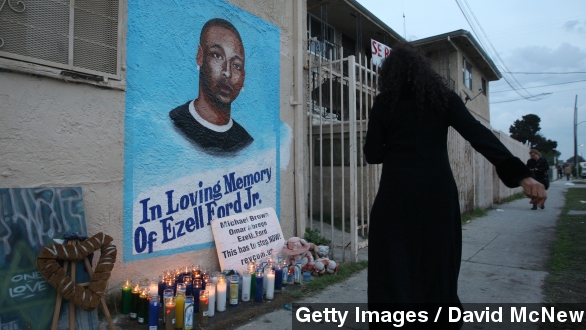 SMS
LAPD Releases Ezell Ford Autopsy, Searches For Witnesses
By Ben Lawson
By Ben Lawson
December 29, 2014
The LAPD had until the end of the year to release Ford's autopsy, which the department says could taint the search for witnesses to the shooting.
SHOW TRANSCRIPT

Los Angeles police have released the autopsy of Ezell Ford, a 25-year-old, unarmed black man shot and killed by officers in August.

The autopsy reveals Ford was shot three times: in his back, his right side and his right arm. The report also tells us the wound in his back had a muzzle imprint, which means the shot was fired at close range. (Video via KTLA)

Witnesses reportedly challenged the police's version of events, alleging there might not have been a struggle. But good luck getting anyone to say that on the record.

Last month, officials held a press conference announcing that they were struggling to gather witnesses for the case.

"People have not come forward ... although we have people in the community saying that they are such witnesses or know of witnesses, " said Los Angeles Police Chief Charlie Beck.

Initially, the LAPD refused to release Ford's autopsy, fearing it would influence witness testimony. But that added even more fuel to the controversy.

Los Angeles Mayor Eric Garcetti then gave police a deadline to release the autopsy be the end of the year, which they met Monday with just two days to spare. (Video via KABC)

Ford's family has filed a wrongful death lawsuit against the LAPD, accusing the officers of racial profiling and using excessive force.

Of course, police throughout the country are under scrutiny for their use of force in cases, like Ford's, involving unarmed black men.

The two officers involved in Ford's shooting have been placed on administrative duty, desk jobs basically, while the investigation is ongoing.