50-Plus Allegations Of LAPD Officer Misconduct Under Investigation 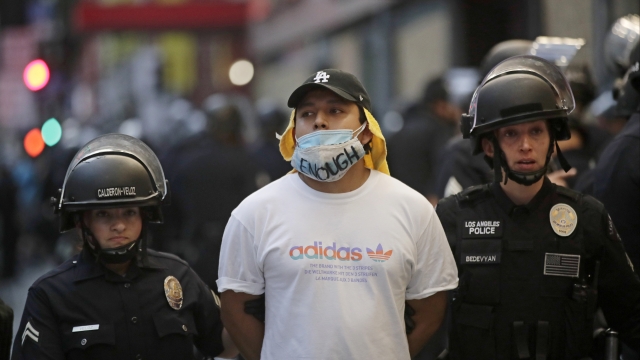 SMS
50-Plus Allegations Of LAPD Officer Misconduct Under Investigation
By Meg Hilling
By Meg Hilling
June 12, 2020
Seven officers have been removed from the field over reports of excessive force during recent protests.
SHOW TRANSCRIPT

The Los Angeles Police Department says it's investigating more than 50 incidents of reported officer misconduct during recent protests over the death of George Floyd.

The department says it has tasked 40 investigators with looking into the allegations of misconduct, which include excessive force and violation of department policies. In a statement, the department wrote that it "will look into every complaint thoroughly and hold every officer accountable for their actions."

Seven officers have been assigned to non-field duties in response to the investigation.

This announcement comes amid calls from politicians for an investigation into how the LAPD responds to protests, as well as discussions about reducing the department's funding. The city is asking anyone who believes they were either wrongfully accused of a crime or experienced misconduct to file a complaint with department’s internal affairs.