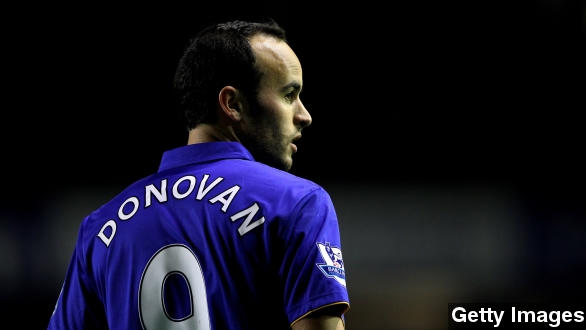 By Ben Lawson
August 7, 2014
Landon Donovan, one of the most notable American soccer players, has announced he will retire after the 2014 MLS season with the Los Angeles Galaxy.
SHOW TRANSCRIPT

Landon Donovan, one of the most celebrated soccer players in U.S. history, announced Thursday he will retire after this current season with the Major League Soccer's Los Angeles Galaxy.

Donovan made the announcement on Facebook writing, "After careful deliberation and after many conversations with those closest to me, I have decided that this will be my last season as a professional soccer player."

In Donovan's 14-year-career, he became one of the most well-known American soccer players.

In the MLS, he has a record 138 goals and has also tallied 124 assists. He's also a five-time MLS Cup winner with two different teams.

The Galaxy's head coach, Bruce Arena, said in a press release: "Landon Donovan is one of the most significant figures in the history of soccer in the United States. His influence on MLS and soccer in this country will continue to be felt for many years to come."

Earlier this year, Donovan was controversially cut from the U.S. team for the most recent World Cup and he instead spent his time as an analyst for ESPN during the tournament.

But that's one pockmark on an otherwise standout career. He appeared in three consecutive World Cups and has more goals than any single American player with five scores. (Video via AOL)

In recent years, the MLS has been working hard to grow it's popularity and losing Donovan's clout could make that even harder.

USA Today called him the "face of MLS" and someone who "worked tirelessly to promote the sport."

Although he'll be leaving the pitch as a professional athlete, Donovan said he hopes to stay close to the sport and continue to help grow the league in the U.S. (Video via Los Angeles Galaxy)

Though the aging Donovan will soon be gone from playing professional soccer, the sport is certainly on the rise in the states.

Sports Media Watch reports that the U.S.'s last World Cup match against Belgium set a record for viewers on ESPN with 16 million.

But Business Insider points out that while more Americans are watching soccer, those fans are tuning into more elite leagues overseas such as the English Premier League. So this increase in soccer's popularity doesn't immediately mean a blossoming fanbase for the MLS.

Donovan's announcement comes less than 24 hours after he scored the winning goal in the MLS All-Star Game Wednesday.