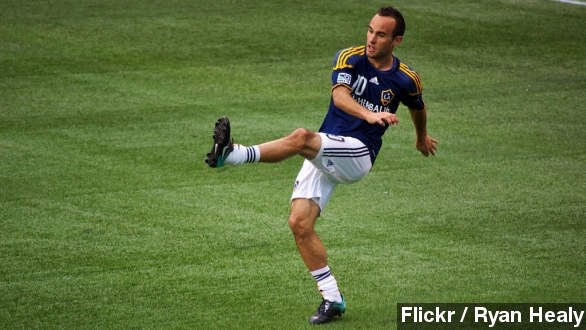 By Cliff Judy
May 23, 2014
There's plenty of speculation on why Landon Donovan didn't make the U.S. World Cup team. Regardless, the word "shocker" is being thrown around a lot.
SHOW TRANSCRIPT

Talk about an unpopular decision. The U.S. soccer team will head to Brazil for the World Cup next month, and for the first time in 16 years, one of the greatest players in American history won't be on that plane. (Via Flickr / Ryan Healy)

THOMAS ROBERTS, MSNBC ANCHOR: "He may be the most well-known American men's soccer player of all time, but Landon Donovan won't be on this year's World Cup squad in Brazil."

Yes, U.S. soccer and head coach Jurgen Klinsmann announced the World Cup men's team Thursday afternoon, and the face most notably absent — the face of U.S. soccer for more than a decade. (Via Twitter / @ussoccer)

In a way, perhaps this is what Donovan always worked toward — competition to make the team so fierce the U.S. no longer needs an iconic face who might not play as much as he did in his prime. Sports pundits didn't entirely buy that.

TOMMY SMYTH, ESPN SOCCER COMMENTATOR: "Surely Landon Donovan can help you out in a World Cup Finals. I don't care!"

BRIAN MCBRIDE, FOX SPORTS SOCCER ANALYST: "I was shocked! I was on the airplane, turn on the Wi-Fi and I couldn't believe it, really. I thought it was a joke at first. It's one of those situations that it comes down to more than just the soccer aspect of it."

Jerry Hinnen with CBS writes while Donovan hadn't trained particularly well during national team tryouts, anyone who said they expected Klinsmann to actually cut the iconic 32-year-old player is lying.

"His relationship with his coach had always been 'uneasy' at best and 'passive-aggressively confrontational' at worst."

Donovan owns the U.S. record for most World Cup games, World Cup goals, overall goals and is second all-time in number of games played for the national team.

As the player who helped lead the U.S. out of soccer mediocrity and into legitimate World Cup playoff competition, Donovan became a rarity in a largely baseball/football/basketball-centric world of U.S. sports celebrities. (Via EA Sports, ESPN)

DONOVAN: "I didn't even do anything!"

Donovan admitted to Yahoo earlier this week he didn't know what was coming — comparing it to the first time he competed to make the team as a 20-year-old in 2002.

"I was looking forward to playing in Brazil and, as you can imagine, I am very disappointed with today's decision. Regardless, I will be cheering on my friends and teammates this summer."

Hopefully, Klinsmann doesn't regret his decision. The U.S. opens play next month in Brazil in Group G, the so-called "Group of Death" because of high-quality teams from Germany, Portugal and Ghana.