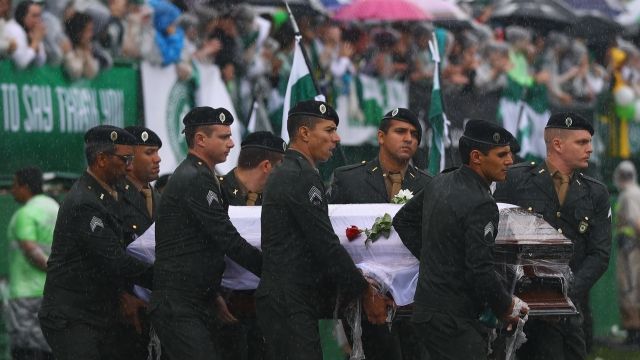 This week, authorities detained the CEO of Bolivian airline LaMia after one of its planes crashed in November. The crash killed 71 people, including almost every member of the Brazilian soccer team Chapecoense.

Bolivia's attorney general said he wanted to determine whether Gustavo Vargas, LaMia's chief executive, could face manslaughter charges if the company is found responsible for the crash.

SEE MORE: Brazil's Chapecoense Could Still Be A Championship Team After Crash

Chapecoense was on its way to Colombia to play in the Copa Sudamericana final — the biggest match in the club's history. After the tragedy, their opponents opted to give Chapecoense the title.

A Bolivian official reportedly told the pilot before the flight that it could be outside the plane's range. The official fled to Brazil seeking asylum after the crash, saying she's being persecuted in her home country.

Brazilian, Colombian and Bolivian prosecutors are now investigating the crash. Before the plane went down, its pilot said the plane didn't have enough fuel and suffered a total electric failure.