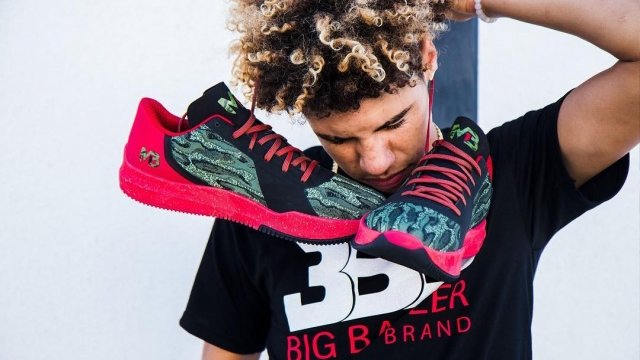 Now, youngest son LaMelo Ball is getting in on the action. The 16-year-old high school basketball star is offering his own sneaker, the Melo Ball 1, for just under $400.

It will be interesting to see how many people buy the shoes of a high school student, especially at that price. But it also casts doubt on LaMelo Ball's college plans.

Ball's already said he'll go to UCLA like his brothers, but the NCAA wants to make sure only amateurs play college sports. Even though LaMelo wouldn't be getting paid specifically for his play, it could still violate NCAA amateurism rules.

The NCAA bars players from "accepting payments or preferential benefits for playing sports." Having your own signature sneaker could likely qualify as a benefit because people don't usually get shoe deals unless they're great athletes.

Middle son LiAngelo is getting left out of the shoe game because, as a freshman at UCLA, he's likely ineligible for a sneaker deal because of NCAA rules.

But LaVar Ball doesn't seem worried about the NCAA. When ESPN asked him about his son's eligibility, he said: "Who cares? If he can't play, then he can't play. It doesn't mean he'll stop working out and getting better."

Skipping college wouldn't be totally unheard of. Brandon Jennings had some eligibility issues, so he skipped college in favor of playing professional basketball in Italy before being drafted 10th overall by the Milwaukee Bucks in 2009.

LaMelo Ball seems on pace to be a high draft pick in 2019 as well, but scouts usually like to see how players fare in college. Though the Balls have shown they don't mind doing things their own way.