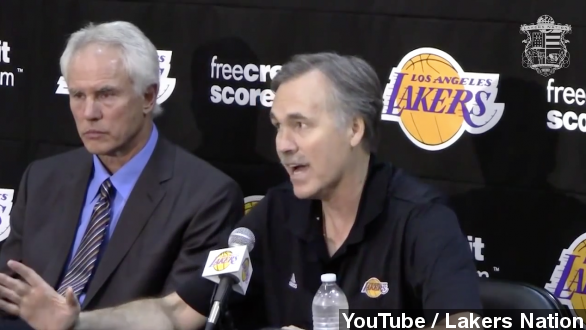 By Cliff Judy
May 1, 2014
Fan and even former player reactions to Mike D'Antoni's resignation show it's hard to argue the Lakers coach ever had much of a shot in LA.
SHOW TRANSCRIPT

It's been a rough basketball spring in L.A. The Clippers owner might be forced to sell the team because of a racist rant caught on tape, and now the team the city actually likes has no coach.

In a move that had the Los Angeles Lakers fan base and even former players essentially encouraging him not to let the door hit him on the way out, Mike D'Antoni resigned as the team's head coach. (Via Flickr / Keith Allison)

D'Antoni had one year left on his contract with a team option for the year after that. Several outlets report when D'Antoni told the Lakers he wanted them to pick up that option, the team balked. (Via Los Angeles Times)

RAMONA SHELBURNE, ESPN REPORTER: "Mike D'Antoni essentially felt like he would not be able to have any kind of success with the team going forward if he was going to enter next season as a lame duck."

DOUG GOTTLIEB, CBS SPORTS NETWORK: "And I think he wanted this. I think he knew what the answer was. You know? 'I want my option. I'm not coming unless I get my option.' And they were like, 'Fine, you know what? We're not giving you your option.'"

In just less than two seasons in charge, D'Antoni led the Lakers to not only an overall losing record. This year's squad was the worst in Laker history losing 55 games.

For their part, the Lakers handled the announcement about as professionally as you'd expect from one of basketball's most storied franchises.

In thanking D'Antoni for his service, GM Mitch Kupchak said, “Given the circumstances, I don’t know that anybody could have done a better job than Mike did the past two seasons.” (Via NBA.com)

But was the team's failure really D'Antoni's fault? Ultimately, team play rests on his shoulders, but it's hard to say he got a fair shake in LA.

Most fans hated his hiring from the start, wanting ex-coach Phil Jackson who led the Lakers to five NBA titles. In a strangely public revelation, Jackson himself even expressed surprise he didn't get the job in 2012. (Via Sports Illustrated)

Throw in an aging, expensive roster that saw injuries to virtually every major player, and the squad D'Antoni got to put on the court more resembled a M.A.S.H. unit than an NBA team. (Via Sports Injury Alert, ESPN & Orange County Register)

Former player Metta World Peace acknowledged as much to KCBS.

METTA WORLD PEACE, FORMER LAKERS PLAYER: "The timing was not right for him. All the injuries — Dwight, Kobe, myself, Nash — and he didn't really get an opportunity to win."

​To be fair, D'Antoni hasn't seen significant coaching success in nearly a decade, and there was talk of a rift between him and some players. Among his many possible replacements, names being thrown around include TNT analyst Steve Kerr, Lakers assistant Kurt Rambis and Clippers coach Doc Rivers.