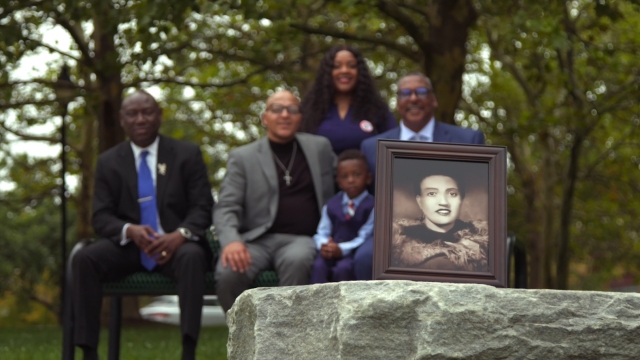 Under a misty Baltimore sky, two grandsons of the woman who contributed a monumental amount of herself to mankind sit.

They are just a few of the descendants of Henrietta Lacks, a woman who they say never gave doctors permission to take her cells, and now they have filed a lawsuit against one company that profited off those cells.

"If you take a medicine or if you put your makeup on in the morning, you know, shaving in the morning or whatever — my grandmother's cells have been a part of that development, of making that product that you're using, and a lot of people don't know that," said Lawrence Lacks Jr., Henrietta's grandson.

It all started in 1951 at Johns Hopkins in Baltimore, Maryland — one of the few hospitals to see Black patients at the time. A 30-year-old Black woman from Baltimore walked into Johns Hopkins hospital for help, where doctors found a tumor on her cervix and diagnosed her with cervical cancer. She died months later, leaving behind five children and a husband.

After her death, doctors there used Henrietta's tissue without her knowledge to create vaccines that saved thousands. Her cells have been used to test hormones, viruses, toxins and drugs. Researchers say they used them to develop vaccines for both Polio and COVID-19 without having to use a human subject, and they've even been sent to space.

Jonhs Hopkins says it never sold or profited off Henrietta's cells – although they did make the hospital well known.

Family members didn't know about the cells until some time later, and they've been fighting to get access ever since.

And although Johns Hopkins initially took the cells, Henrietta's descendants aren't suing the hospital — they're going after another company, which they say took those cells, mass produced and sold them while knowing Lacks had never given anyone her permission to do so.

"This lawsuit is about genetic justice," Crump said. "Why should Thermo Fisher Scientific have intellectual property rights to his grandmother's cells? This fight should be over. Another generation of Lacks' should not have to go to fight for their grandmother or their family's legacy to get  what is rightfully theirs."

"We are very proud of what my grandmother cells has done," said Ron Lacks, Henrietta's grandson.

For decades, the medical community never knew Lacks' true identity or the story of how tissue was taken from her and used to create what are known as HeLa cells.

These sought-after cells did something no other cells had ever done, growing outside her body and dividing endlessly, which is why scientists call them immortal cells.

"Her cells were the gold standard of medical research and product development, and if we were to cease and desist, the use of her cell lines would come to a standstill," Lawrence said.

Crump says this is only the first of what could be many lawsuits centered around the cells.

"Her immortal cells are the cornerstone of modern medicine," Crump said. "I mean, every medical advancement in the last 70 years was based on research from using her cells, and all these pharmaceutical companies have made billions upon billions of dollars while her family, her children, have benefited not one red cent."

Henrietta's story is more common than one might think. Europe dealt with a similar scandal in recent times. The Guardian reports between 1988 and 1994 a Children's Hospital doctor harvested organs from 850 babies without asking for parents' permission.

Now this case could set a precedent for the years-long debate over patients' rights to biospecimens and how they should be handled.

"It feels like a long time coming, that this is the right moment in time for us to be going forward with this case," Ron said.

The Lacks family says in the last several years, Thermo Fisher Scientific has made huge profits, but the family hasn't seen a dime. They're asking the court for all profits from the cells, and they also want to approve future use of those cells.