Upcoming Democratic Debate Will Have Fewer Voices Of Color 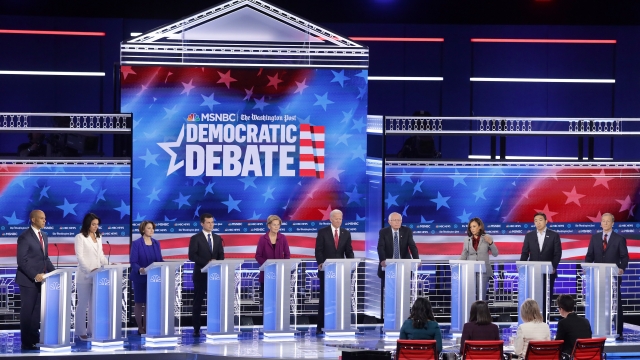 A once historically diverse field of Democratic presidential candidates will look a lot different during the next debate. And the exclusion of Black or Latino candidates from the stage could alienate voters the party depends on.

Seven candidates qualified for the December debate. Entrepreneur Andrew Yang will be the only non-white candidate on stage.

"What was exciting was the fact that that stage looked like the diversity of this country," said Melanie Campbell who is president and CEO of the National Coalition on Black Civic Participation.

Melanie Campbell leads a nationwide network of women of color, and says she's spoken to other black leaders about diversity in the 2020 field.

Campbell calls black women the secret sauce behind the party's success. But those voters won't be able to hear from candidates with real-life experience about the issues that are important to them since Sen. Cory Booker was unable to qualify for this round and Sen. Kamala Harris dropped out of the race.

"When black women make 61 cents on the dollar as compared to all women who tragically make 80 cents on the dollar, the question has to be where you been and what are you going to do," said California Senator Kamala Harris during the November Democratic debate.

What are the key issues that you're hearing about from the black community that these candidates should touch on for sure?

"Issues of racism, hate crimes, criminal justice, policing reform and then the other kinds of issues that impact us. Affordable healthcare is still a major concern," Campbell said.

During the 2018 Midterms, 91 percent of black women voted for Democrats. While polls indicate the majority of African Americans support white candidates starting with former Vice President Joe Biden, along with Senators Bernie Sanders and Elizabeth Warren, Campbell says polls don't give the most accurate picture of how a race will turn out.

"The end result is we have a stage where we haven't had the first vote yet and the voters should decide, not polls alone, it just doesn't make sense," Campbell said.

New Jersey Sen. Cory Booker and former HUD Secretary Julian Castro have called out the DNC for the qualifications used to get on the debate stage. Booker, Castro and Rep. Tulsi Gabbard failed to meet the polling threshold to secure a spot for the debate.

DNC communications director Xochitl Hinojosa told Newsy in a statement that the committee is proud of the historic field and quote.

"..Our qualifying criteria has stayed extremely low throughout this entire process....In addition, we have made diversity a priority by requiring that every debate have women and people of color as moderators. We’ve never seen a political party take this many steps to be inclusive."

"And I keep saying it every chance I get. To the current candidates, bring your 'A' game if you want black women to see you as a viable candidate to get our vote," Campbell added.