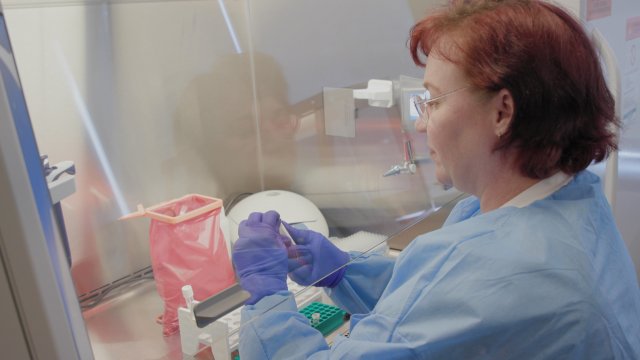 Labs are now processing hundreds of thousands of tests a day for the coronavirus, much more than the trickle in the beginning but still far short of the 5 million tests per day Harvard researchers say it will take to safely lift America’s lockdown.

And yet many labs have the capacity to do more testing right now.

“We're just not getting samples in,” said Crystal Icenhour, CEO and co-founder of the Aperiomics lab in Sterling, Va.

Aperiomics could test 2,500 samples a week, she said.

Instead, technicians are processing just a few hundred per week.

During a tour of her lab with social distancing and with a Newsy crew wearing masks, Icenhour showed the lab’s break room.

Dozens of boxes of unused test kits lined the wall and sat stacked on top of a pingpong table at the center of the room.

“There’s somewhere around three to four thousand sitting in this room,” she said of the kits.

There is testing supply without demand.

“What we're hearing from the health care providers is they're confused,” Icenhour said. “There's also not a clear set of guidelines from the government, either national or state governments, as to who should be tested.”

Eurofins U.S., with labs in Missouri and Alabama, told us their extra testing capacity is because of insurance plans favoring larger labs, and hospitals now able to do their own tests in-house.

For other labs, a lack of supplies is the problem.

Integrity Labs in Tennessee told us the global shortage of nasal swabs is keeping their testing numbers down.

“Swabs are like gold,” Integrity Laboratories CEO Christian Clevenger said. “Other labs are having the same exact issue. There’s some mismanagement of resources for these swabs.”

Avellino Labs in California says it’s waiting on local governments and companies to figure out how to scale up testing.

“We have the capacity, we know the demand is there, it’s really an organizational question,” said Eric Bernabei, chief sales and operating officer. “We could do thousands more tests a day.”

She said the U.S. health care system has yet to pivot from ensuring the sick get tested to mass testing of people without symptoms, including screening for antibodies to see who has already had the virus.

“I don’t understand why it’s taking so long.” Maldonado said. “We’re basically just testing the tip of the iceberg. Those are the squeaky wheels basically, the people who are sick or have a reason to come in. Testing as a proportion of the total population in the region, that is what I’d like to see.”

The White House published a mass testing blueprint that leaves it to states to make their own plans.

“We know that we have more laboratory capacity,” said Dr. Deborah Birx, White House coronavirus response coordinator. “Governors are well aware of how to expand testing now, so we’re in that partnership.”

President Trump says testing will increase to the 5 million a day recommended in the Harvard study, about 16 times the amount of testing occurring now.

A White House official who asked not to be named gave Newsy a lower testing goal, saying the federal government will assure a minimum 2% of a state’s population can be tested each month.

A Newsy analysis found 27 states are not yet hitting that testing target, even as unused kits sit in boxes.