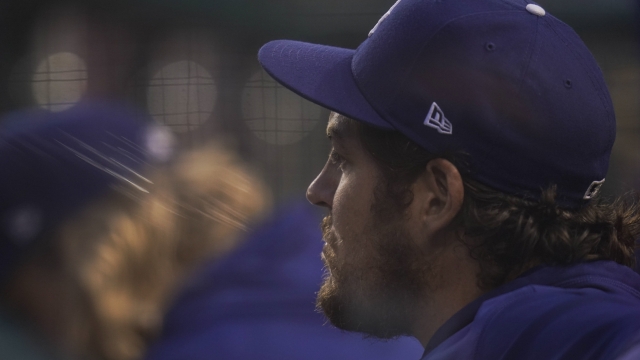 SMS
LA Pitcher on Administrative Leave After Sexual Assault Accusation
By Associated Press
By Associated Press
July 2, 2021
In a domestic violence restraining order against him, a 27-year-old woman described the alleged abuse and laid out evidence of injuries.
SHOW TRANSCRIPT

Trevor Bauer was placed on administrative leave by Major League Baseball on Friday, three days after an allegation of assault was made against the Los Angeles Dodgers pitcher.

“MLB’s investigation into the allegations made against Trevor Bauer is ongoing," the commissioner's office said in a statement. “While no determination in the case has been made, we have made the decision to place Mr. Bauer on seven-day administrative leave effective immediately. MLB continues to collect information in our ongoing investigation concurrent with the Pasadena Police Department’s active criminal investigation.”

The leave was imposed under the joint domestic violence, sexual assault and child abuse policy adopted by MLB and the players' association in 2015 and can be the initial step leading to a longer suspension. The administrative leave has been extended for players under the policy in the past.

Bauer was not with the Dodgers when the team met President Joe Biden at the White House earlier Friday to celebrate the World Series title they won last year. He had been scheduled to start Sunday against the Washington Nationals.

A protection order against Bauer was obtained under the Domestic Violence Prevention Act and was the result of an assault by Bauer that left the woman who sought the order with "severe physical and emotional pain,” Marc Garelick, the woman's attorney, said this week.

The protection order includes multiple graphic images from the woman who filed the request, according to The Athletic. The woman, in the 67-page ex-parte document, said Bauer assaulted her on two different occasions. Together, the woman said those two incidents included Bauer punching her in the face and body, sticking his fingers down her throat, and strangling her to the point where she lost consciousness multiple times, according to the document.

The alleged assaults described by the woman happened during what she said began as consensual sexual encounters between the two. According to the woman’s declaration attached to the request and obtained by The Athletic, she suffered injuries as a result of the second encounter, including two black eyes, a bloodied swollen lip, significant bruising and scratching to one side of her face.

Pasadena, California, police spokesman Lt. Bill Grisafe confirmed the department is looking into accusations of an assault involving Bauer, but provided no additional details. A hearing in Bauer’s case is scheduled for July 23.

Jon Fetterolf, one of Bauer’s agents, has disputed the allegations. He said Bauer met the woman in April, and the two had “a brief and wholly consensual sexual relationship initiated” by the woman.

“Her basis for filing a protection order is nonexistent, fraudulent, and deliberately omits key facts, information, and her own relevant communications,” Fetterolf said. “Any allegations that the pair’s encounters were not 100% consensual are baseless, defamatory, and will be refuted to the fullest extent of the law.”

Fetterolf said the woman asked Bauer repeatedly for “rough” sexual encounters, demanding to be “choked out” and slapped in the face.

Fetterolf contended Bauer and the woman remained friendly in text messages after their encounters.

Bauer and the woman haven’t corresponded for over a month and haven’t seen each other in six weeks, Fetterolf said.

Bauer's other agent, Rachel Luba, tweeted late Thursday: “As an agent and an attorney, I think it is important to reiterate that I will always defend my clients when I believe the accusations made are false — and I will continue to do that. I am privy to MUCH more information than what has been reported publicly at this time and am confident that the truth will come to light.”

Bauer is a 30-year-old right-hander who joined his hometown Dodgers this year with a $102 million, three-year contract after winning his first NL Cy Young Award with the Cincinnati Reds last season. He is 8-5 with a 2.59 ERA.