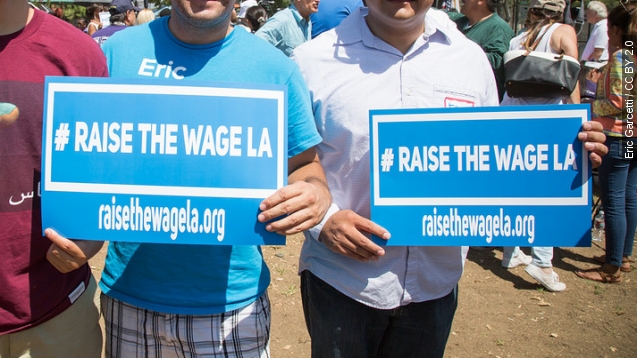 The national fight for higher minimum wages got a big boost Tuesday as city council members in Los Angeles, the nation's second largest city in the most populous state, voted in favor of a $15 an hour minimum wage. (Video via KTLA)

L.A. City Council members voted 14-1 to lift the minimum wage, in annual increments, from $9 an hour to $15 an hour by 2020. Proponents of the measure say this will help hundreds of thousands of workers in L.A. who live in poverty. (Video via KCAL)

The vote doesn't actually change the law in L.A. just yet, but it does put the measure on track to be signed into law by mayor Eric Garcetti — who actually started the Raise The Wage campaign.

"I think the greatest prosperity in the city is when everybody who works hard can support themselves," Garcetti said.

After the vote, Garcetti released a statement saying, "I want to thank the City Council ... for joining me in building a stronger city and I look forward to signing this legislation."

Los Angeles could soon join cities like San Francisco and Seattle, where their local governments have also voted for wage increases to $15. L.A.'s vote could also cause a ripple effect in Southern California and even influence other states to follow suit.

A Fight for $15 campaign leader told The New York Times New York Governor Andrew Cuomo could feel pressure to push for a minimum wage increase and bump his current $11.50 proposal up to $15 now that L.A. has taken the lead.

The measure will now go to the city attorney's office. A draft will then be sent back to the city council for final approval before Garcetti gets his chance to sign it.