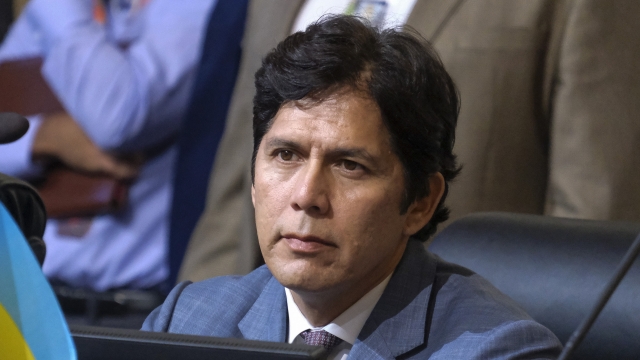 De Leon called the comments in the private meeting "horrible" but said he will not resign "because there is a lot of work ahead."

Embattled Los Angeles Councilman Kevin de Leon said Wednesday he will not resign amid an uproar over a leaked tape that revealed him participating in a meeting in which Latino officials made crude, racist remarks and plotted to expand their political power.

The scandal already has led to the resignation of former City Council President Nury Martinez and calls from President Joe Biden for those involved to step down.

De Leon told the Univision Spanish-language station that he is "so sorry," and wants to continue working on homelessness and other problems in his district.

The councilman also told KCBS-TV in Los Angeles that he would refuse to resign. "I failed in my leadership," he said.

His statement was immediately criticized by other Council members pushing for his resignation.

"Apologies will not be nearly enough to undo the damage that this city has suffered," said Council President Paul Krekorian, who replaced Martinez in the leadership post. "The only way we can begin to heal as a city is for Mr. de Leon to take responsibility for his actions, accept the consequences and step down."

The two men have refused widespread calls to step down despite condemnation that led the City Council president to resign last week.

The Council cannot expel members — it can only suspend a member when criminal charges are pending.

The racist comments came in a nearly year-old meeting, which also provided an unvarnished look into the city's racial rivalries. Those involved in the private meeting — all Democrats — spent much of the time discussing how to safeguard Latino political power during the redrawing of council district boundaries.

Martinez stepped down last week, but de Leon and Councilmember Gil Cedillo have so far resisted widespread calls for their resignations.

The Los Angeles City Council installed a new president Tuesday — Krekorian — after a chanting crowd of protesters called for halting the vote until de Leon and Cedillo resigned for their part in the 2021 meeting.

In the heavily Latino Boyle Heights section of de Leon's district, some voters said they'd had enough. Carlos Loera, 52, said he previously voted for the councilman but now thinks it's time for him to go.

"We don't want him here because he's racist," said Loera, a salesman reviewing items at a local household goods shop with a view of downtown Los Angeles.

"The trust is not there anymore," Loera said in an interview before de Leon announced his decision to remain on the Council.

It's not known who made the recording, or why it was released in the run-up to next month's midterm elections.

Nury Martinez stepped down from the presidency but still remains on the City Council, amid calls for her removal.

"I will not resign because there is a lot of work ahead," de Leon said in the interview, referring to unemployment, fallout from the continuing pandemic and the threat of evictions for renters in a city with soaring housing prices.

"I feel very bad, I feel very sorry for the damage, for the wounds that exist today in our communities," he said.

The remarks were his first since the White House called for him to resign. He has not appeared at recent meetings, and the Council stripped him and Cedillo of much of their power as they seek to increase pressure on them to resign.

The interview Wednesday was conducted by Leon Krauze, an anchor for Univision Noticias national network.

"I ask for forgiveness from all my people, my community for the damage that those painful words caused on that day," he said.

De Leon called the comments in the private meeting "horrible," but said the responsibility for the offensive language rested with Martinez, who has resigned.

"I failed for not raising my voice," he said.

When asked about a joke he made on the recording about Councilman Mike Bonin carrying around his son like Martinez carries around her Louis Vuitton bag, de Leon called it a "bad joke and I apologize."

In a statement on Twitter, Bonin called de Leon's comments "gaslighting of the highest order."

"His comments on that tape make clear he is unfit for office," Bonin added.

Los Angeles City Council members are among the highest paid in the country with annual salaries of nearly $229,000, and de Leon's announcement also keeps his city paychecks coming.

While staying in office, de Leon and Cedillo have continued to earn their biweekly salary of $8,779.20, which increased this past July. As long as they remain on payroll, they also continue to receive medical and pension benefits.

In a letter Wednesday to Krekorian, de Leon asked to be excused from Council meetings "in coming weeks" to attempt to "rebuild the relationships I've broken." He also said he would seek "professional sensitivity training."

"Until this moment in my life, I couldn't have imagined being part of the problem instead of the solution," de Leon wrote.