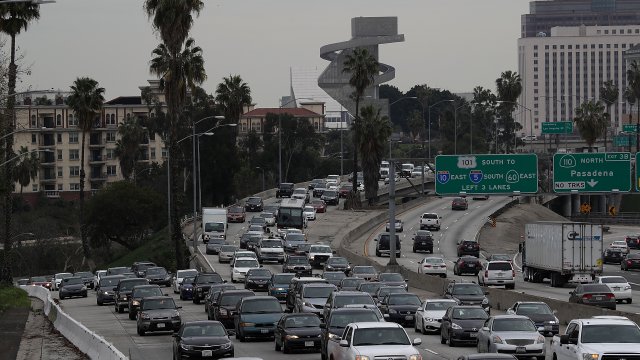 Los Angeles announced its own version of the Green New Deal on Monday. Mayor Eric Garcetti says the city is staying true to the Paris Climate Agreement and wants to reach 100% emission-free or electric vehicles by the year 2050. Right now, only 1.4% of the city's vehicles are emission-free.

In a press release, Garcetti said: “Politicians in Washington don’t have to look across the aisle in Congress to know what a Green New Deal is — they can look across the country, to Los Angeles.”

The updated sustainability plan for the country's second-largest city lists a number of goals meant to help mitigate some effects of climate change. It points to climate scientists who have implored the world to cut emissions by 45 percent by 2030 and reach net-zero emissions by 2050.

Right now, drivers in Los Angeles are on the road for an average 15 miles per day. Another part of the city's plan is to trim that down to nine miles by 2035. To do that, it plans to encourage residents to use public transportation more often and launch "congestion pricing" where there's usually heavy traffic.

The plan also suggests new buildings be "net-zero carbon" over the next decade and converting all buildings to zero-emission technologies by 2050.

Garcetti says he's hopeful the plan will help fight climate change, expand the city's economy and improve quality of life. He said: "My goal is to build such a strong coalition that the next mayor, the mayor after that, has to accelerate these goals further. There will be pride in this. There will be a sense of who we are."