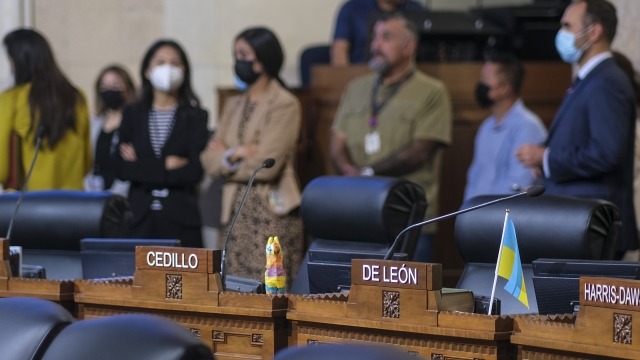 The Los Angeles City Council formally rebuked two members and its former president Wednesday for their involvement in a racism scandal that has led to days of protests, police and state investigations and shaken public faith in City Hall.

The 12-0 vote to censure former council President Nury Martinez and Councilmen Gil Cedillo and Kevin de León represented the strongest step the council can take to publicly reprimand them for their participation in a secretly recorded 2021 meeting laced with crude, bigoted comments, in which the Latino Democrats schemed to protect their political clout in the redrawing of council districts at the expense of Blacks and renters.

The council cannot expel members — it can only suspend a member when criminal charges are pending. While a censure is largely symbolic, it adds new weight to the pressure coming from across the political spectrum for Cedillo and de León to resign.

Councilman Paul Koretz said he remained in shock from listening to the offensive remarks that he said had severely damaged trust in government. Like it or not, he lamented that the recording reflected on the entire council.

"It's going to take us years to rebuild this trust," Koretz said before the vote.

Councilman Curren Price called the censure a "crucial step in a long road to healing" and the harshest measure the council could take, lacking the ability to expel members.

Three Council members are facing calls to resign after racist remarks, and three others have been indicted or pleaded guilty to corruption charges.

Martinez resigned shortly after the release of the tape earlier this month, along with a powerful labor leader, Ron Herrera, who also attended the meeting.

However, Cedillo and de León have resisted widespread calls to step down, including from President Joe Biden, and have become political pariahs among their colleagues.

Anyone involved in the meeting "does not belong in elected office," Koretz said.

Earlier, the council meeting was called into recess to allow police to clear chanting protesters. A small but noisy group crowded into the main aisle of an otherwise mostly empty chamber, banged water bottles on a lectern, whooped and shouted in what appeared to be an effort to shut down the meeting. They unrolled a large sign calling the council "illegitimate."

"Justice now!" they bellowed. "Shut down!"

That led to a standoff in which about 20 protesters continued shouting as police officers watched over the group. Eventually, the room was cleared.

Council President Paul Krekorian warned the protesters they would not deter the council's business. "We will continue to do the work of the people of Los Angeles," he said.

It's not known who made the tape, or why. It was released on the website Reddit just weeks before the November midterm elections.

In the course of the hourlong meeting, they also made offensive remarks about immigrants from the Mexican state of Oaxaca, Jews, Armenians and other groups.

Two investigations are underway stemming from the release of the tape.

The Los Angeles Police Department is investigating whether the recording was made illegally — under California law, all parties must consent to the recording of a private conversation or phone call.

Separately, the state is investigating how the council districts were drawn and whether the process was rigged. Attorney General Rob Bonta, a Democrat, has said his investigation could lead to civil liability or criminal charges, depending on what is found.

Bonta said Wednesday that his office notified the city of Los Angeles and the Los Angeles County Federation of Labor, where the meeting took place, to preserve evidence, a routine step in an investigation.

The council appears headed into a long period of turmoil.

Cedillo and de León have not attended recent meetings.

Cedillo, whose term ends in December, has been out of public view. De León has two years left in his term and has appeared in a string of media interviews apologizing and saying he wants to continue his work on the council.

In an interview Tuesday with talk-show host Tavis Smiley on KBLA radio, de León reiterated that he was not resigning. "I'm not the person the folks have been painting me to be," said de León, who previously has apologized.

Krekorian, the president, and other council members have said Cedillo and de León must resign.

"There is no realistic possibility that you can effectively continue to serve," Krekorian recently told de León in a letter. "Every day you remain interferes with the council's ability to function, delays the city's healing process, hurts your constituents and reduces your chance of redeeming yourself."