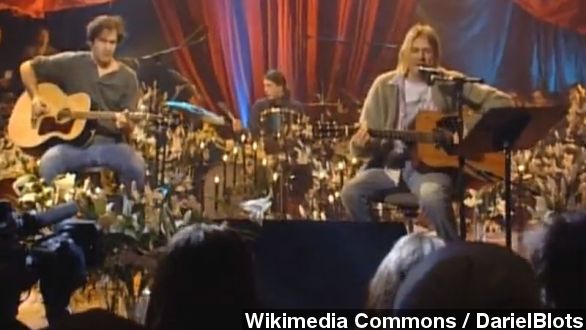 You may have heard that Seattle police were reopening their investigation into the death of Nirvana frontman Kurt Cobain. (Via Radar Online, WZLX, E!)

The rumors started after that report from Seattle TV station KIRO. The station reported a cold-case detective came across four rolls of undeveloped film in a police evidence vault, and that led police to reopen the case.

But that detective explained in a statement Cobain's case is definitely staying shut. He says he only went digging in the first place to familiarize himself with the case, should reporters ask questions. "We knew with the 20th anniversary coming up and we knew there was going to be a lot of media interest."

And when he came across the photos — showing drug paraphernalia and packets of heroin at the scene of the suicide — the department chose to release them. (Via Seattle Police Department)

That detective also clarified in his statement the police department didn't process the photos back in 1994 over fears it would prompt further conspiracy theories. Still, some are questioning the department's decision to release them now.

"Kurt Cobain was found dead Friday morning in a house he owned in Seattle." (Via MTV)

Investigators say he died of an apparent self-inflicted gunshot wound. Traces of heroin were also found in Cobain's bloodstream, and his death was officially ruled a suicide. (Via NBC)

But many believed he was murdered — pointing to inconsistencies in the investigation. (Via JusticeForKurt.com)

"It's scientifically impossible that he committed suicide. ... The suicide note when he died, the last five lines, didn't match his handwriting." (Via CBS)

The New York Daily News may have summed up the sentiment best, writing: "Like plaid, public fascination with Kurt Cobain's death never goes out of style."

KIRO's managing editor explained some of the confusion on Twitter — saying the detective on the case told the station the case was being reopened.