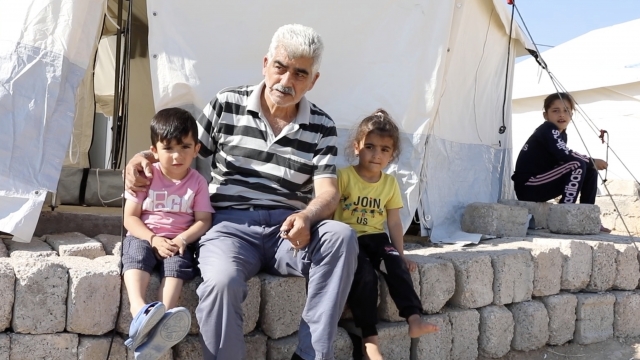 It’s been roughly a month since Turkey launched its military operation into northeast Syria, which came after President Trump said he would withdraw U.S. troops from the region, which had been controlled by Kurdish fighters. The same Kurdish fighters who had been among America’s closest partners in the fight against ISIS. It’s a decision that Kurds in this refugee camp say they won’t forget easily.

Mahin Farmez Moussa is a refugee from Syria. He said, "unfortunately, us Kurdish people say that Trump broke our backs and did not help us. He did not tell the truth. I can say that he lied."

Like most of the 12,000 people living in this refugee camp, Moussa is Kurdish, part of an ethnic minority of about 30 million people spread out across Iraq, Turkey, Iran and Syria

When Americans hear about the Kurds, it’s often in the context of war. We’re hearing about Kurdish fighters, or what some people label terrorists. What do you want Americans to know about who the Kurds are and what it means to be Kurdish?”

"We consider all religions as equals with no discrimination." Moussa said, "they make no distinction among Muslims, Christians and Yazidis. We are hopeful. We know that Americans will recognize us as not terrorists."

Turkey wants to drive away the Kurdish fighters, saying they are linked to a terrorist group that’s waged a decades long insurgency in turkey and is responsible for the deaths of an estimated 40,000 people but many of those fighters Turkey says are terrorists were instrumental in helping the U.S. take on ISIS, something Kurds in this refugee camp are quick to point out.

"There have been more than 11,000 deaths. I am certain that one or two people have died from each Kurdish family. If not their sons, then it must be sons of their brothers or cousins. We struggled to stop ISIS for Europe, America and the whole world.

About a month ago,  Moussa was living in a comfortable life as a writer and artist. Now he’s sleeping in a tent.

"I was not poor, nor rich. Fortunately, I would not wear these dirty shoes, nor these dirty pants. My children were clean and taken care of when they would get sick." Moussa says, "now we cannot buy anything. In my country, there were doctors, medicines, and help. I was thrown into another life. We are kind of safe here but we still miss our country. Our whole life has changed. The future is unknown."