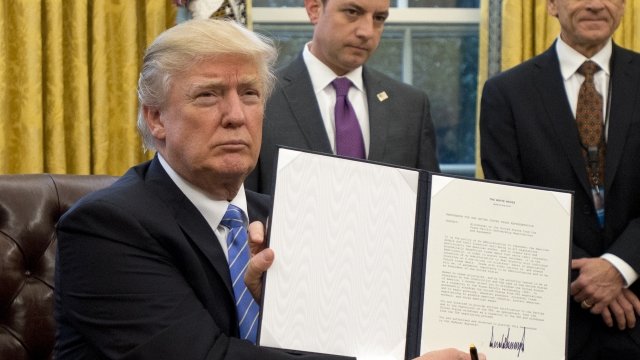 President Donald Trump seems to be toying with the idea of re-entering the Trans-Pacific Partnership. Key word: toying.

Trump said to a group of Republican lawmakers and governors at a meeting Thursday that he told his economic adviser and trade representative to look at re-entering the TPP. And while many lawmakers said they were pleased with that news, at least one was skeptical. Nebraska Sen. Deb Fischer told Politico she didn't see any eagerness for the idea.

Re-entering the TPP would alleviate some pressure from GOP lawmakers who represent plain states. Farmers in that part of the country would be hard-hit by the president's tariffs against steel and aluminum imports as well as goods from China.

White House economic adviser Larry Kudlow said on Fox Business the president is "taking another look at" the TPP. He said no decisions have been made.

The 11 other countries that are part of the TPP signed on to a revised agreement last month after President Trump pulled out last year.