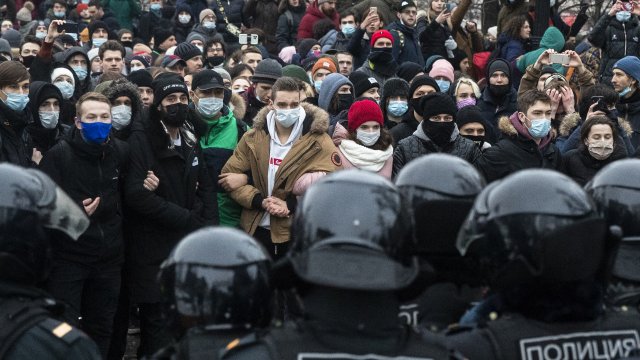 Putin spokesman said statements from the U.S. supporting protests in Russia are in "direct support for the violation of the law."

A spokesman for Russian President Vladimir Putin is accusing the U.S. of helping stir up the largest opposition protest the country has seen in years.

More than 3,500 people were arrested in weekend demonstrations against Putin.

Kremlin press secretary Dmitry Peskov responded that the criticisms from the U.S. embassy "indirectly constitute absolute interference in our internal affairs" and are "direct support for the violation of the law."

Peskov claims the protests are being exaggerated by those who want to destabilize the country. And though he noted potential for talks with the Biden administration and Russia, he referred to the U.S. as more of an enemy than a partner at the moment.

Putin's spokesman also accused the U.S. of publishing protest routes for the thousands of protesters who took part in the demonstrations, which are demanding the release of opposition leader Alexei Navalny.

Navalny is Putin's best-known critic and was arrested upon returning to the country from Germany where he was treated for a poisoning he blames on the Kremlin.

The U.S. has called for the release of the protesters and Navalny, and they're pushing for an investigation into his poisoning. A state department spokesperson said, "The United States will stand shoulder to shoulder with our allies and partners in defense of human rights – whether in Russia or wherever they come under threat."

And with no sign the Kremlin will release Navalny and Peskov's negative response to U.S. support, there's likely more conflict to come. Navalny's supporters have vowed to continue protests this week.