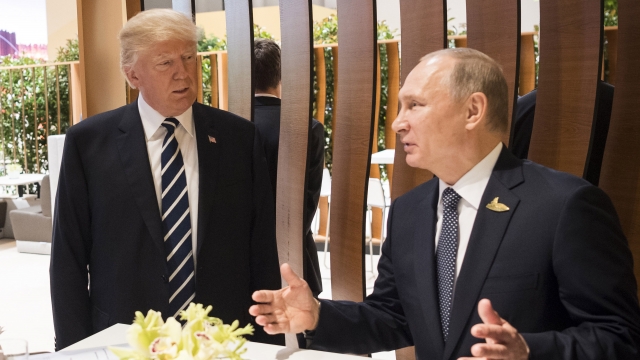 SMS
Kremlin Dismisses Trump's Claim It's Removing Military From Venezuela
By Ahmed Jawadi
By Ahmed Jawadi
June 4, 2019
A Kremlin spokesperson said he had no idea what Trump was talking about in reference to Russia having "removed most of their people from Venezuela."
SHOW TRANSCRIPT

On Tuesday, the Kremlin pushed back against a tweet from President Donald Trump that said Russia is withdrawing its military personnel from Venezuela.

On Monday, President Trump tweeted Russia told him it had "removed most of their people from Venezuela." But on Tuesday, Kremlin spokesperson Dmitry Peskov told reporters he had no idea what Trump was talking about, adding Russian military specialists are still working in Venezuela.

Peskov speculated President Trump might have gotten his information from "newspaper sources," as "there was no official message about this from the Russian side." On Sunday, The Wall Street Journal reported that Russian state defense contractor Rostec had cut its staff in Venezuela from about 1,000 to "just a few dozen" over the last several years. Rostec denied the report, saying there have been no changes to its permanent staff over there, and that technical staff are rotated in and out of the country all the time.

Tensions between the U.S. and Russia over Venezuela had escalated ever since Juan Guaidó, the leader of the country's National Assembly, declared himself interim president earlier this year. While the U.S. recognizes Guaidó as the country's legitimate leader, Russia still backs current President Nicolás Maduro. In May, Secretary of State Mike Pompeo urged Russia to end its support for Maduro so that the Venezuelan people can "get their democracy back." In response, Russia said Guaidó's actions and threats have "nothing in common with democracy."