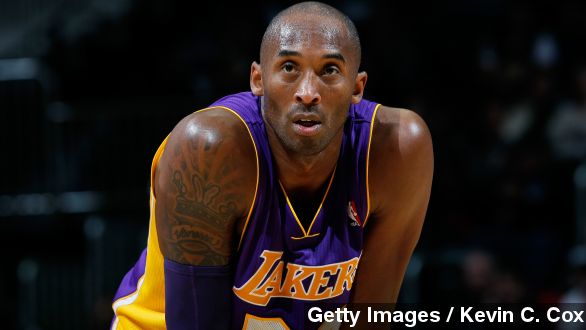 SMS
Kobe Bryant Likely Out 9 Months After Shoulder Surgery
By Jay Strubberg
By Jay Strubberg
January 29, 2015
The Black Mamba is expected to be sidelined for the next nine months. Will he return next season? And, if so, with what team?
SHOW TRANSCRIPT

We already knew Kobe Bryant wouldn't play again this NBA season, but now we know how long it'll be before he's back — should he choose to return.

The Los Angeles Lakers announced Wednesday Bryant is expected be sidelined for about 9 months after having surgery to repair a torn rotator cuff.

One of the physicians who repaired Bryant's injured shoulder said, "I expect Kobe to make a full recovery and if all goes as expected, he should be ready for the start of the season."

ESPN says the statement "effectively confirmed [Bryant] won't retire and will attempt to play his 20th season in the fall." But the Lakers made no mention of that in their official release.

"Breaking News: Kobe Bryant could be out for the season."

This is, of course, a bit of deja vu for the Black Mamba. He's closed out each of the last three seasons on the injured list. (Video via Showtime / 'Kobe Bryant's Muse')

Whether or not Bryant decides to come back is anyone's guess. But it would likely be difficult for him to shy away from the $25 million the Lakers owe him next season. Plus, some sports analysts say it's kind of in his blood to bounce back.

"These are the things that fuel him. Injuries like this. You know, the feeling that people are discounting him and counting him out, thinking he can't come back from this," Sports Illustrated Senior Writer Phil Taylor said.

And the Lakers, as a whole, are dismal at best. As of Wednesday, LA is 12-34, one of the worst records in the league — a far cry from Kobe's championship heyday in the 2000s.

Some sports writers have speculated the 5-time NBA champion could be swapped to another team as the Lakers look to rebuild their struggling franchise.

Bryant has the highest salary in the NBA and critics argue that money could be better spent on bringing in new talent. (Video via ABC / 'Jimmy Kimmel Live')

And some... are a bit more dramatic than others.

"The Lakers, as an organization, as a franchise that we once knew and loved... it's over," Stephen A. Smith said.

Or as a Los Angeles Times writer puts it, "The team needs to turn the page. ... From a basketball perspective, [Kobe] should retire — but in the real world, Bryant has earned his Derek Jeter year, even if the cost will be another season of Lakers purgatory."