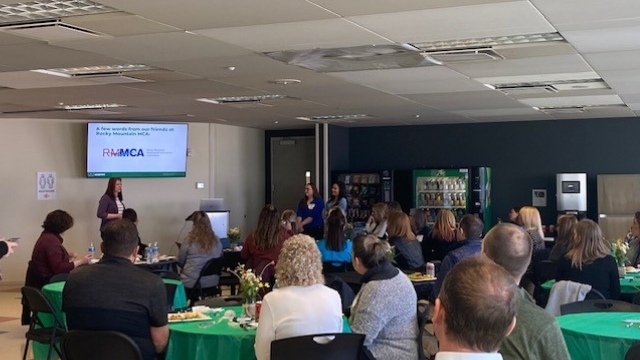 In recognition of International Women's Day and Women in Construction Week, Murphy Company, a mechanical contractor, in partnership with the Rocky Mountain Mechanical Contractors Association, hosted a luncheon for dozens of Denver metro women working in the construction industry.

"Today we are spreading awareness for women in construction," said Jazleen Aguilar, marketing coordinator for Murphy Company. "We want ladies in schools, as well as just choosing career paths in colleges, to be aware that a career in construction is a choice and it's a great choice."

According to the Bureau of Labor Statistics, around 10% of the construction industry is made up of female employees, or 1.1 million women compared to 10 million men.

The BLS also found that on average, women in construction make $5,000 more a year than women working in non-construction related jobs.

"I think the more diversity we have in any industry the better ideas that we get," said Thornton Mayor Jan Kulmann.

Kulmann, who spoke during the event, said she’s spent 23 years working in the construction industry.

"I am the director of Well Construction for Whiting Petroleum," Kulmann said.

She said she doesn't get to speak about her career path often, and she was excited to share her story with other women who have had similar career paths.

"Not a lot of people talk about women in construction and so getting the word out is really important," she said.

"I love the fact that my son sees me in this role and knows that I can do it and is proud of me. And I love that my daughter sees me and knows that she can do anything," she said.

Employees from Murphy Company also plan to speak to local high school students about careers in construction later this week.

This story was originally published by Micah Smith on thedenverchannel.com.