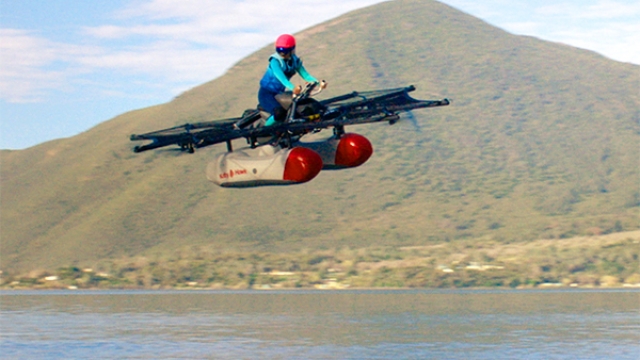 The Kitty Hawk Flyer is an all-electric aircraft that's designed to "fly" over water. And it's pretty cool.

And you could be zipping around in one of your very own by the end of this year.

The Flyer was designed by Kitty Hawk, a company backed, in part, by Google co-founder Larry Page.

It might look a little tough to navigate. But the Flyer's creators say it only takes a few minutes to learn the ropes, and you won't need a license to take one for a spin.

Tesla has overtaken Ford in terms of market value.

Let's be honest — this thing looks more like a spaceship out of "Star Wars" than an actual car.

But an extremely lucky writer for Medium who got to take a test drive says the final version will have a "very different" design from the prototype.

Kitty Hawk has yet to set a price for the retail version. But the company is appealing to eager pilots with a $100 three-year membership.

That will get you priority placement on a waiting list, company-branded gear and a $2,000 discount off the eventual retail price.