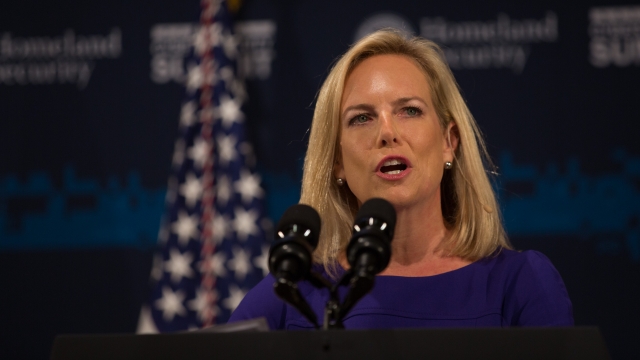 But President Donald Trump is signaling he's looking for someone even more aggressive to replace her, leaving immigration advocates and Democratic lawmakers worried about what could come next.

"The problem is what is Donald Trump going to do now," Sen. Amy Klobuchar, a democratic presidential candidate said in an interview with CNN.

"I can't say I have a lot of hope for whomever President Trump puts in her place," Michigan Democratic Rep. Dan Kildee told CNN.

Nielsen is best known for overseeing and defending the Trump administration's "zero tolerance" immigration policy, which saw nearly 3,000 families separated at the border.

She also formally requested thousands of National Guard and military troops be sent to the border, billions of dollars in emergency funding to construct a border wall, and oversaw efforts to block migrants from seeking asylum.

Under Nielsen's leadership the number of immigrant detentions has surged by nearly 25 percent.

But it seems she still wasn't tough enough on immigration to satisfy Trump, who earlier this year forced the longest government shutdown in history over funding for a wall on the southern border.

Trump has expressed a desire to see the border completely shut down to new migrants, even those seeking asylum.

"Our country is full, our area is full, the sector is full. We can't take you anymore I'm sorry,' Trump said at a meeting with Customs and Border Protection officials this weekend.

And he reportedly pressured Nielsen to take steps to stem the uptick of border crossings, including asking her to illegally block all migrants from seeking asylum.

Trump will likely make similar demands of the next DHS secretary, but it's unclear what that person would actually do to achieve those goals.

Kevin McAleenan, the head of Customs and Border Protection will serve as acting Homeland Security secretary but Trump is expected to nominate someone more rhetorically tough on immigration.

But whoever ends up receiving the nomination will surely face an intense confirmation process in the Senate, and the next DHS Secretary will likely find themselves once again stuck between legal constraints and Trump's demands to stop migrants from crossing the border.