'Kingsman' Takes The No. 1 Spot While 'It' Continues To Break Records 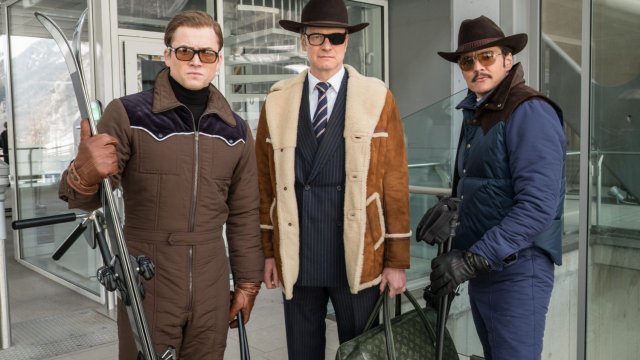 SMS
'Kingsman' Takes The No. 1 Spot While 'It' Continues To Break Records
By Jamal Andress
By Jamal Andress
September 24, 2017
The sequel lagged behind box-office expectations but did manage to beat the original "Kingsman" debut by about $3 million.
SHOW TRANSCRIPT

It's an American tradition as old as the nation itself: Take something British and make it as obnoxious as possible.

Taking the No. 1 spot this week and finally dethroning that child-eating clown is "Kingsman: The Golden Circle," bringing in an estimated $39 million. The sequel lagged behind box-office expectations but did manage to beat the original "Kingsman" debut by about $3 million.

Also falling in line with the original, "Kingsman: The Golden Circle" had a solid foreign box-office debut, bringing in about $61 million overseas.

Unfortunately, though, critical reception hasn't been quite as kind to the franchise’s sophomore effort.

Alonso Duralde of What the Flick?! called "Kingsman: The Golden Circle" "really dull" and said the film is "too long."

The consensus from critics is a lot of, "If you like the first one, you'll like this one too." But unfortunately for the sequel, the novelty of "Kingsman" is gone now, and so with it — the ripe red tomato.

But enough about spies. Let's talk about clowns. After two weeks at No. 1, "It" has finally dropped a spot, bringing in an estimated $30 million in its third week out. While this was essentially a foregone conclusion after the huge debut, "It" is now officially the highest-grossing R-rated horror film of all time both domestically and worldwide.

Taking a disappointing third place bow this week is "The Lego Ninjago Movie," bringing in an estimated $21 million — a far cry from its two predecessors.

The original "Lego Movie" was an all-star kids flick, bringing in an estimated $69 million in its debut and carrying a 96 percent on the Tomatometer. The follow-up "Lego Batman Movie" was similarly praised and brought in about $53 million in its opening.

The Ninjago film was fairly "meh" all the way around. But for what it's worth, "The Lego Movie Sequel" hits theaters in 2018, and I think if we all try really hard, we can pretend this never even happened.

As for next week, med students take "bad decision-making" to new heights.