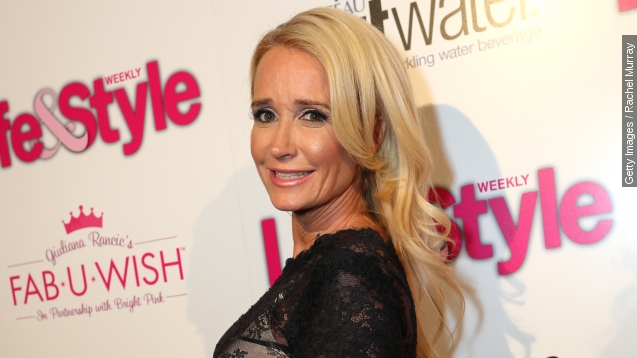 2015 has been tough for Kim Richards, who was arrested Sunday for the second time this year. She was allegedly shoplifting.

In April, she was also arrested and charged with public intoxication, trespassing, resisting an officer and battery on an officer.

She will also not be returning as a full-time cast member for season six of "The Real Housewives of Beverly Hills" as a result of her substance abuse issues and a serious fallout with her sister Kyle.

Richards' sobriety has been a relatively well-known struggle, playing out both on the reality show and in the media.

Shortly after the April arrest, Dr. Phil tried to speak with her about her struggles, hoping he could convince her to go to rehab.

But she thought the interview was becoming an intervention, so she ended up walking out. (Video via King World Productions / "The Dr. Phil Show")

"I have a lot of anxiety, I'm sorry I can't," she said before she left the interview.

A day later, Dr. Phil said Richards called him to accept the treatment offer at Malibu Beach Sober Living, where she remained until she attended her daughter Brooke's Cabo San Lucas wedding in May.

Things still didn't seem right though when Page Six sources said the 50-year-old acted like she was in "a bit of a fog," despite not actually being intoxicated.

And that final stint seemed like somewhat of a success.

She told Entertainment Tonight in July she loved sobriety and saw rehab as a refuge from her stressful situation at home. She moved in with ex-husband Monty Brinson after he was diagnosed with terminal stage 4 cancer.

"I love sobriety. ... Relapsing was very hard for me," she told Entertainment Tonight.

Brinson told Entertainment Tonight this most recent arrest must be a misundertanding, emphasizing the incident did not involve drugs or alcohol. She was released Monday afternoon after posting a $5,000 bail.