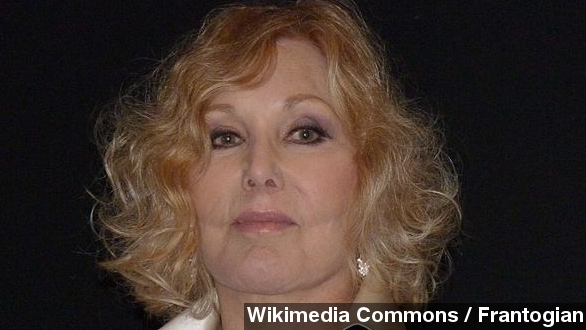 By Jasmine Bailey
April 18, 2014
Kim Novak stands up for herself after harsh criticism about her face following her appearance at the Oscars in March.
SHOW TRANSCRIPT

It's been more than a month since the Oscars aired, but this week Kim Novak, who was a presenter at the award show, addressed what she calls "the elephant in the room" through an open letter on Facebook.

"When the 81-year-old actress took the stage that night, there were certain comments about her appearance. ... Novak admits it all made her reluctant to go out in public." (Via Fox News)

She responded to those comments in her open letter, writing: "In Hollywood, after the Oscars, I was bullied by the press and the public on the Internet and TV. ... I will no longer hold myself back from speaking out against bullies. We can't let people get away with affecting our lives. We need to stand up to them in a healthy way by speaking out." (Via Facebook / Kim Novak)

One of those bullies Novak mentions is real estate mogul Donald Trump. On Oscar night, he tweeted to his 2.5 million followers: "I'm having a real hard time watching the Academy Awards (so far). ... Kim should sue her plastic surgeon!" (Via Twitter / @realDonaldTrump)

And Trump wasn't the only one making harsh comments — much of the Twittersphere was abuzz. (Via E!, New York Post, USA Today)

In the letter, Novak did admit to having fat injections in her face, saying it seemed less invasive than a facelift, and she also said she took a pill to calm her nerves.

She said she regretted taking those pills after outlets called her exchange with fellow presenter Matthew McConaughey "awkward." However... (Via NineMSN)

"The former Hitchcock muse says ... a person has the right to quote 'look as good as they can.'" (Via NBC)

And with pressures from Hollywood to do just that, there are many coming to the defense of the 81-year-old.

As Slate's Amanda Hess put it: "Even for the young, Hollywood beauty has never been strictly natural. When Novak entered the industry in the 1950s, studio executives made her cap her teeth, bleach her hair, shrink her body. ... Hollywood made Novak a star, then abandoned her—decades ago."

And also coming to the former actresses' defense, a writer for The Washington Post. "What made the digs at Novak seem especially cruel is that now, people know better. ... We know many of the images we see have been doctored to perpetuate unreal, unattainable beauty standards. ... And the mud gets slung anyhow."

Also in her open letter, Novak says she works out and paints in order to get out frustrations. Earlier this month, she told KABC she doesn't even consider herself part of the movie industry anymore.

"I love movies, but I'm not part of movies anymore. I'm part of the art world."