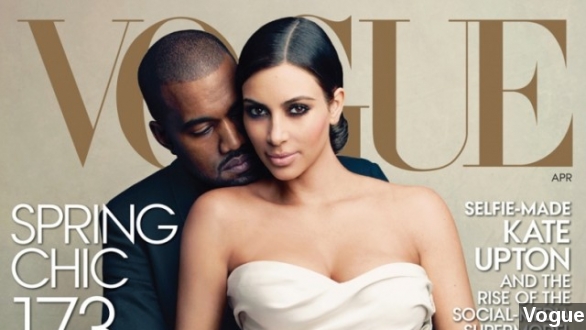 By Briana Koeneman
March 21, 2014
Reality queen Kim Kardashian, along with her fiance, rapper Kanye West, has finally made it on the cover of Vogue magazine.
SHOW TRANSCRIPT

Reality queen Kim Kardashian, along with fiance rapper Kanye West, has made it to the cover of Vogue magazine.

Famed photographer Annie Leibovitz was behind the mag's April cover photo shoot, and some of the shots even feature the couple's daughter, North West. (Via Vogue)

And Kimye definitely seemed thrilled about the cover after its release Friday, both taking to Twitter to express their excitement.

West described the moment as #TRILL, whatever that means. And Kardashian said she couldn't even "breath." We're thinking she meant "breathe," but we'll give it to her. (Via Twitter / @kanyewest, Twitter / @KimKardashian)

A source told Radar Online back in 2012: "Anna Wintour would allow Kim Kardashian on the cover of Vogue over her dead body. As long as Anna [is] in charge you will NOT see Kim on Vogue."

But, lucky for Kardashian, who has expressed interest in gracing Vogue's cover for years, West apparently changed Wintour's mind somewhere along the line. The Kimye April issue hits stands Friday.