Kim Jong-Un Talked About Denuclearization While In China 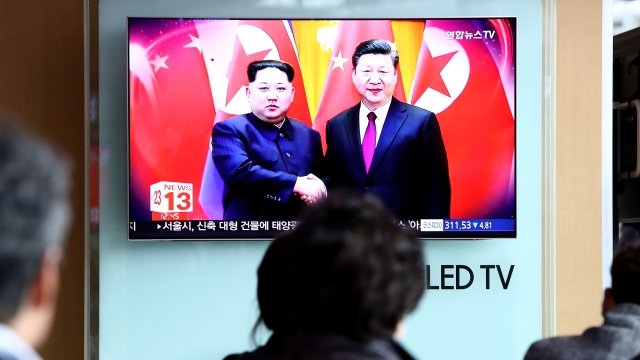 SMS
Kim Jong-Un Talked About Denuclearization While In China
By Katherine Biek
By Katherine Biek
March 28, 2018
But the North Korean leader reportedly told his Chinese counterpart that he has a few conditions.
SHOW TRANSCRIPT

North Korean leader Kim Jong-un reportedly assured his Chinese counterpart that he is committed to denuclearization.

But Xinhua reports Kim said he's only willing to do so if South Korea and the U.S. respond with "goodwill" and "create an atmosphere of peace and stability."

Chinese state media reported Kim arrived Sunday for an unofficial visit to China at the invitation of President Xi Jinping.

During that visit, Kim reportedly said he's willing to hold a summit with leaders from the U.S. — though it's worth noting that North Korean state media did not mention that in its coverage. North Korea has yet to officially respond to U.S. President Donald Trump, who said last month he'd accepted an invitation to meet with Kim.

China is one of North Korea's major allies, and analysts described the meeting to CNN as "a courtesy call aimed at shoring up Pyongyang's ties with China."