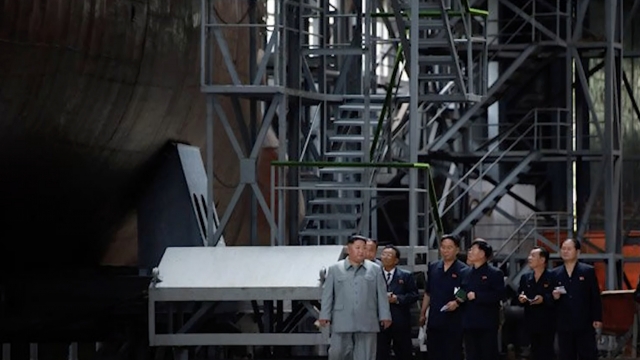 North Korea is showing off what appears to be a newly built submarine.

According to state media, Kim Jong-un inspected the new submarine and was briefed on its operational and tactical data and combat weapon systems. The reports didn't provide any technical details about the sub, and it's unclear exactly when Kim conducted the inspection.

But state media said Kim "expressed great satisfaction" with the vessel and added the North plans to deploy it soon.

The reports also said Kim stressed the need to "steadily and reliably increase" the North's defense capabilities "by directing big efforts to the development" of naval weapons and equipment.

As CNN notes, Pyongyang is believed to have about 70 submarines. Experts say they're probably old and don't have the ability to fire nuclear-armed ballistic missiles.

But some analysts believe this new sub could be big enough to carry multiple projectiles, which would substantially bulk up the North's maritime weaponry.

The news comes as North Korea and the U.S. are working to restart denuclearization talks. President Donald Trump said Monday the two sides have yet to set a date, but they have recently exchanged "very positive correspondence."