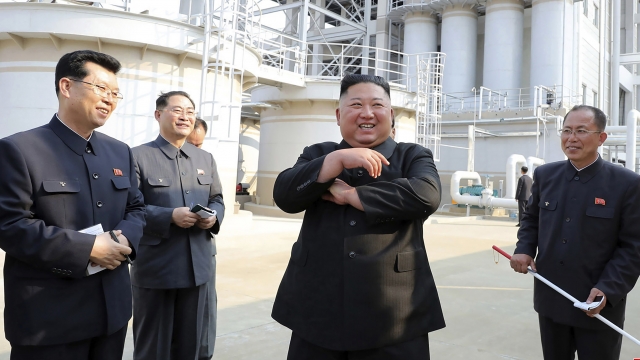 SMS
Kim Jong-Un Didn't Have Surgery, South Korea Says
By Bailey Vogt
By Bailey Vogt
May 3, 2020
South Korea's government determined Kim's weeks-long disappearance in April was not due to a reported recovery from surgery.
SHOW TRANSCRIPT

South Korea said Sunday that North Korean Leader Kim Jong-un never had the surgery which had led to suspicions of him being in poor health or even dead.

South Korea's government determined Kim's weeks-long disappearance in April was not due to a reported recovery from surgery, according to the Associated Press. The South didn't share what information led to this conclusion.

The North Korean leader appeared in public Friday for the first time since April 11th. Reports surfaced Kim was in critical condition following heart surgery April 12th and — with him missing a major national holiday and the North's government not explaining his disappearance — speculation swirled.

However, the South's government and North Korean monitoring publications said the dictator was likely still alive, and on Friday, pictures and videos showed a smiling Kim touring a new factory seemingly unencumbered. President Donald Trump tweeted "I, for one, am glad to see he is back, and well!"

The highly secretive North Korean government has yet to publicly explain their leader's prolonged absence.