Kim Darroch Resigns As British Ambassador To The U.S. 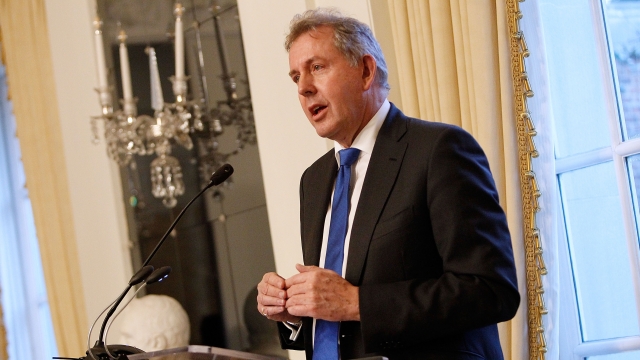 SMS
Kim Darroch Resigns As British Ambassador To The U.S.
By Katherine Biek
By Katherine Biek
July 10, 2019
His resignation comes several days after a series of confidential memos in which Darroch criticized the Trump administration were leaked to the press.
SHOW TRANSCRIPT

The U.K. government announced Wednesday that Kim Darroch has resigned as the British ambassador to the U.S.

His resignation comes several days after a series of confidential memos in which he criticized the Trump administration were leaked to the press.

The Daily Mail published the series of diplomatic cables, which date from 2017 to the present, on Sunday. In them, Darroch told the U.K. government that the Trump administration was "dysfunctional" and "clumsy and inept."

Darroch warned that President Donald Trump could damage the world trade system and go to war with Iran. The diplomat also stressed that his British colleagues shouldn't underestimate the commander-in-chief.

After the publication of the cables, President Trump said he will no longer work with Darroch.

Meanwhile, a spokesman for outgoing U.K. Prime Minister Theresa May pointed out that ambassadors are supposed to give "honest, unvarnished assessments of the politics in their country." He also said that Darroch has May's "full support."

But in his resignation letter to the U.K. Foreign Office, Darroch wrote that he thought it best to appoint a new ambassador, since "The current situation is making it impossible for me to carry out my role as I would like."

Lawmakers later paid tribute to Darroch in Parliament, with May saying the British government owed him an "enormous debt of gratitude." And Labor leader Jeremy Corbyn said Darroch "has given honorable and good service."

Darroch had served as the British ambassador to the U.S. since 2016. He'd previously been scheduled to step down from the post later this year.