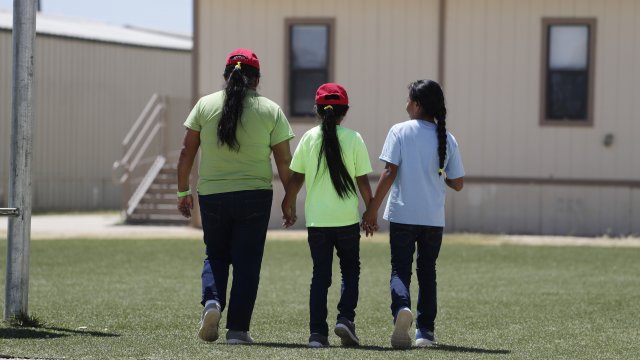 SMS
Immigrant Kids Remain In ICE Detention Despite Deadline To Free Them
By Ben Schamisso
By Ben Schamisso
July 27, 2020
A federal judge wanted kids freed from detention by Monday, citing COVID cases. But ICE's refusal to free their parents is creating a legal impasse.
SHOW TRANSCRIPT

Dozens of immigrant children remain in ICE family detention centers even though a federal judge wanted them released by Monday, citing COVID-19 cases among detainees and staff.

Despite the deadline, ICE and immigrants' lawyers have not yet agreed on a process for parents to consent to their children's release without them.

The impasse stems from ICE's refusal to release families together. Advocates and former officials tell Newsy the agency's actions are cruel and unethical.

"They have taken this draconian approach that if they force families to separate that it's going to discourage them from coming across the border," said John Sandweg, a former ICE director.

"Mothers have repeatedly expressed concern that either they or their child are going to get sick and die in detention. All of this could be avoided if ICE used their discretion to release the children and the families together," said Stephanie Alvarez-Jones who represents families inside the family detention center in Dilley, Texas.

U.S. District Judge Dolly Gee, who doesn't have jurisdiction over the detained parents, ordered ICE to release all children who have been held in family detention for more than three weeks.

Under a long-standing court settlement, immigrant children can only be detained in facilities that meet certain standards for no longer than 20 days.

"The average length of detention for a child in Dilley is over 200 days. So far, far, far beyond the 20 day minimum. We have families that are approaching one year in detention," said Alvarez-Jones.

At least 85 parents, kids and staff at two of the three family detention facilities have tested positive for COVID-19.

In response to a Newsy request, ICE said the agency is "in compliance with all federal court orders related to COVID-19" and following CDC guidelines.

"The administration has tons of options here in a way that I think still promotes border security," said Sandweg, who served as an ICE director in the Obama administration.

He says the Trump administration should stop dragging its feet since it has the ability to release families together without giving them a "free pass."

"Release the family as a unit, accelerate the removal proceedings for the entire family, including the children. That alone often proves sufficient. But if you want to escalate things even further, you can use ankle bracelets or electronic monitoring," Sandweg says.

Because the Trump administration is refusing, for now, to release families together, Judge Gee is asking ICE and immigrants' lawyers to come up with an alternative by August 5 that doesn't separate families.

In a different lawsuit, attorneys are trying to release families by bringing their cases one at a time in front of a different judge.