This Kid's Question Made Sarah Sanders Choke Up 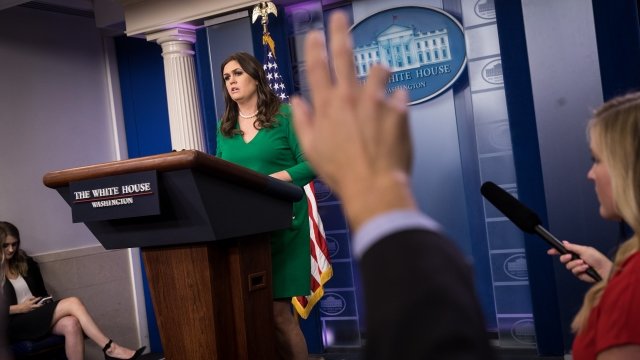 SMS
This Kid's Question Made Sarah Sanders Choke Up
By James Packard
By James Packard
May 30, 2018
A 13-year-old reporter told Sanders he and his friends worry they "could get shot at school" and asked what the Trump administration is doing.
SHOW TRANSCRIPT

During the White House press briefing Wednesday, press secretary Sarah Sanders called on a journalist substantially greener to White House reporting than the rest of the room. But his question was poignant, and Sanders' answer was unlike most.

"At my school, we recently had a lockdown drill," 13-year-old Benje Choucroun began. "One thing that affects my and other students' mental health is the worry about the fact that we or our friends could get shot at school. Specifically, can you tell me what the administration has done and will do to prevent these senseless tragedies?"

Sanders responded, "I think that as a kid and certainly as a parent, there is nothing that could be more terrifying for a kid to go to school and not feel safe." And she starting choking up as she said: "So, I'm sorry that you feel that way. This administration takes it seriously, and the school safety commission that the president convened is meeting this week again, an official meeting to discuss the best ways forward and how we can do every single thing within our power to protect kids within our schools and to make them feel safe and make their parents feel good about dropping them off."

It goes without saying that's not kind of thing you see in that room every day. But in her answer, Sanders actually touched on something that's garnered the Trump administration some criticism: the school safety commission.

Critics argue the commission is too small, too slow and too secluded. They point to very few meetings since forming and the fact that its only made up of four Cabinet members as reasons for concern.

Politico quoted an official with the School Superintendents Association as saying just Cabinet members on the commission means it'll be political and not productive. But for its part, the Department of Education says keeping the circle to just federal employees helps it avoid red tape and move faster.

And the meetings the commission has held so far have been largely behind closed doors, though a video of a May meeting was uploaded to the Education Department's YouTube page.

Education Secretary Betsy DeVos, who chairs the commission, says it will put out a final report by the end of the year with findings and recommendations of "best practices." In the meantime, states, schools and school districts are implementing their own safety measures.