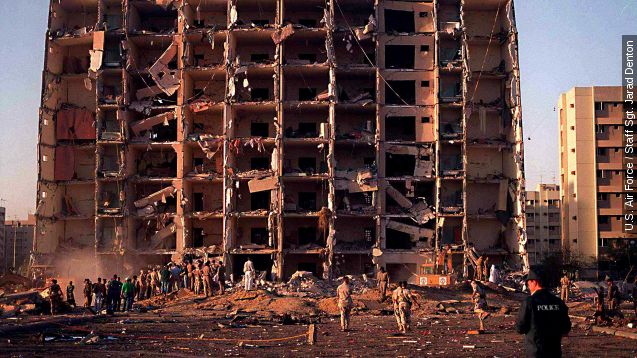 SMS
Khobar Towers Bombing Suspect Arrested After 19 Years
By Jake Godin
By Jake Godin
August 26, 2015
A suspect in the 1996 Khobar Towers attack in Saudi Arabia has been arrested in Beirut, Lebanon, after he was on the run for 19 years.
SHOW TRANSCRIPT

A suspect from the 1996 Khobar (KOE-bar) Towers bombing has been caught.

After 19 years on the run, Ahmed Ibrahim al-Mughassil (AH-med ahl-moo-GAW-sull) was arrested in Lebanon's capital on Wednesday.

That's according to a Saudi-owned paper, which says al-Mughassil planned the bombing in Tehran while he was head of the military wing of Hezbollah's Saudi Arabian offshoot.

In 2001, the U.S. indicted al-Mughassil for his connection to the attack: On June 25, 1996, a truck bomb blew up outside a military housing complex in Khobar, Saudi Arabia, killing 19 U.S. service members and injuring hundreds of people.

In all, 13 Saudis and one Lebanese were indicted in connection with the bombing.