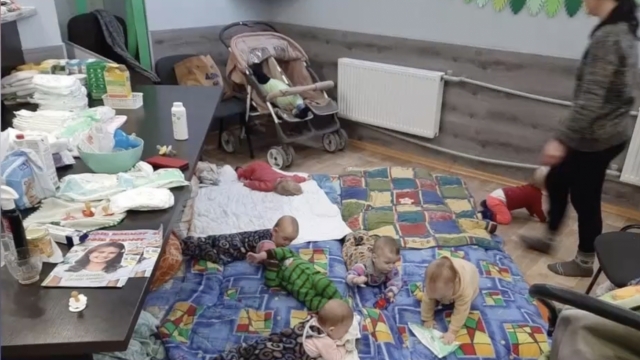 On a floor in the basement of the Calvary Baptist Church in Kherson lies empty mattresses and a room full of cushions used as makeshift beds. For seven long months, this was home to 46 Ukrainian babies and toddlers, all orphans, until the Russians took them away.

Kherson was the first major city to fall to the invaders. A local orphanage, home to children from 4 months to 4 years old, was dangerously close to the fighting.

But even more terrifying, the Russians started hunting for children. So the orphanage spirited away the young children under their care and hid them in the basement of Koznyncec's church. Some had just begun to walk, he says.

"I remember one coming to me and taking my finger in his hands."

The conditions were spartan, but they were safe and cared for. Protected — or so they thought. Then one day the Russians came for the children, first forcing them back to the orphanage and then abducting them.

"The Russians were under fierce attack from Ukraine’s army," Koznynec says. "So they loaded the children onto buses and drove them in a column with grad rocket launchers, using them as human shields."

Amid the daily reports of the horrors of war, the abduction barely made a ripple.

Vladimir Sagaidak says with nothing coming in or out, the people of Kherson — and the orphans — are running out of food.

On Telegram, the governor of Kherson Oblast posted that the Russians took the children to Crimea and pleaded for their return.

"Little Ukrainians illegally detained by the Russians must return to Ukrainian territory as soon as possible!" said the governor.

There are many other orphans in Kherson. Newsy met some of them via video conference last spring.

And when we went looking for them, some had been taken and others had managed to hide in people’s houses until the day of liberation. But they’re the lucky ones. More than 8,000 children have been removed by the Russians. The forced removal of Ukrainian children to Russia is one of the most emotionally charged war crimes that the Russians are accused of. Ukraine is determined to get every child back from Russia.

"Ukraine will not be conquered, our people will not surrender, and our children will not become the property of the occupiers," said President Zelenskyy in June.