One Suspect In Khashoggi Disappearance Has Ties To Saudi Crown Prince 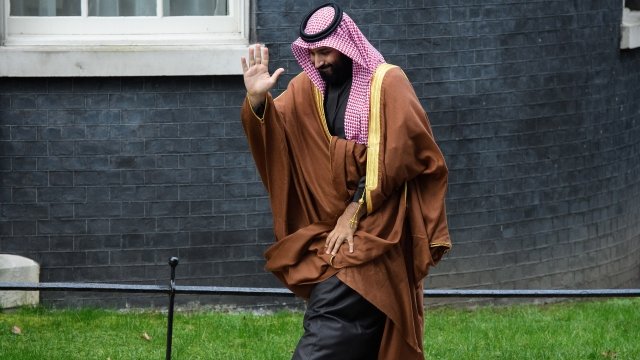 By Katherine Biek
October 17, 2018
Turkey is reportedly looking at more than 12 suspects as Secretary of State Mike Pompeo talked with officials about Jamal Khashoggi in Ankara.
SHOW TRANSCRIPT

U.S. Secretary of State Mike Pompeo met with officials in Turkey Wednesday in an effort to seek more answers in the disappearance of Jamal Khashoggi.

Pompeo's meetings in Ankara came one day after he met with Saudi Arabia's King Salman in Riyadh to get his country's take on the incident.

"I stressed the importance of them conducting a complete investigation of the disappearance of Jamal Khashoggi and they made a commitment, they said they would do that. They said it would be a thorough, complete and transparent investigation," Pompeo told reporters before leaving Saudi Arabia.

Saudi officials have publicly denied having a hand in Khashoggi's disappearance. But Turkish investigators reportedly found "certain evidence" that the Washington Post columnist was killed inside the Saudi consulate in Istanbul, where he was last seen entering on Oct. 2.

The New York Times reports Turkish authorities are looking at more than a dozen suspects in connection to the incident — one of whom was described as "a frequent companion" of Saudi Crown Prince Mohammed bin Salman.

As the Times pointed out, that connection could poke some holes in the theory that Khashoggi was killed in a "rogue operation" that was carried out without clearance from the Saudi government.

Turkish police reportedly plan to search the Saudi consul general's residence Wednesday, which is located close to the consulate building. The consul general is currently back in Saudi Arabia after departing Turkey on Tuesday.