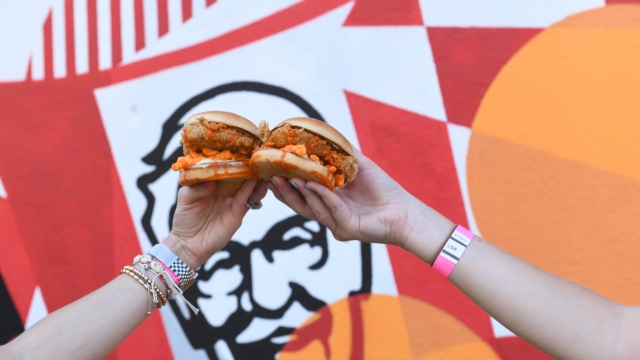 In wake of the summer's celebrated chicken sandwich clash between Popeyes and Chil-fil-a, it may be tempting to suggest that the chicken wars are going nuclear.

They're not. After all, we're just talking about sandwiches here, and perhaps some atomic levels of calories and fat.

Lizzy Acker, a columnist for The Oregonian newspaper in Portland calls it all "a marketing ploy, a distraction," perhaps like this. But under this headline, calling for peace in the chicken arms race, she lets loose.

"The polar ice is melting very, very quickly, and here in Portland, we can’t figure out how to fix the I-5 bridge," she writes. "We had a serious measles outbreak, and people are dying from vaping...We wring our hands and then drive our cars to the drive-thru to buy chicken freaking sandwiches."

The chicken marketers love it. After Popeye's went after Chick-fil-A in a p.r. campaign for its new sandwich, more people visited both restaurants. Chick-fil-a got a huge boost on social media. And KFC got a splash in June by pairing chicken and Cheetos.

Some people take it a little seriously. A Tennessee man sued Popeyes when its sandwiches ran out. And a man in Texas allegedly vented his frustration by drawing a gun.

So maybe Chris Crowley, who writes for New York Magazine's magazine's Grub Street blog, has a point. Opining on KFC's chicken and donut sandwich introduction in Pennsylvania and Virginia, he concludes darkly that America is in free fall.