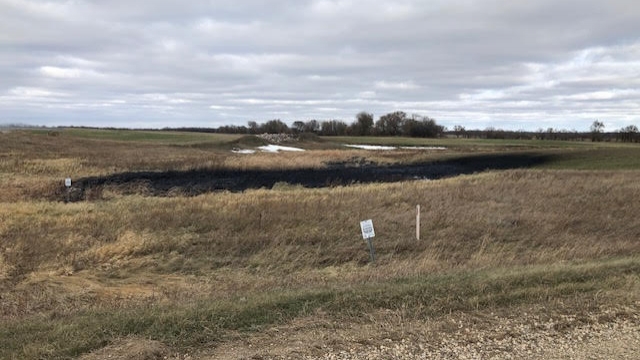 SMS
Keystone Pipeline Leaks 383,000 Gallons Of Oil In North Dakota
By Johannah Grenaway
By Johannah Grenaway
October 31, 2019
The 383,000-gallon leak happened along the existing Keystone pipeline system, not to be confused with the proposed XL pipeline.
SHOW TRANSCRIPT

North Dakota environmental regulators are investigating what caused 383,000 gallons of oil to leak from the Keystone pipeline in North Dakota, covering about a half-acre of wetlands.

Regulators were notified of the leak in northeast North Dakota late Tuesday. The pipeline owner, TransCanada Energy, shut it down that night. Officials on the scene Wednesday estimated the spill area to be 1,500 feet long by 15 feet wide. No drinking water sources have been impacted.

The Keystone pipeline system is shown here as the solid green line. It starts in Canada and moves tar sands oil through seven different states to refineries in Illinois and Oklahoma. A leak in 2017 spilled over 400,000 gallons of oil, and two other leaks in 2016 and 2011 each spilled roughly 16,000 gallons.

Karl Rockeman, the director of North Dakota's Department of Environmental Quality's Division of Water Quality, told Newsy the agency's main focus is the most recent spill, which has been contained within the wetland it impacted. The cleanup is ongoing. He said it's crucial to monitor pipelines so that when there is a spill, it can be addressed quickly and the impact can be minimized.

The cleanup process can vary from spill to spill, but Rockeman says the first steps in Tuesday's spill are burning the area, removing any surface liquid with pumps and vacuum trucks, and excavation. All of this depends on what the full delineation shows.

Tuesday's leak happened along the existing Keystone pipeline system, not to be confused with the proposed XL pipeline addition, which is the dotted green line and has been targeted by protesters for years. Critics are concerned the addition would threaten the surrounding land and drinking water. The Sierra Club has vocally opposed the XL line, and an associate director there said Tuesday's leak goes to show oil spills are bound to happen.

"We don't yet know the extent of the damage from this latest tar sands spill, but what we do know is that this is not the first time this pipeline has spilled toxic tar sands, and it won't be the last. We've always said it's not a question of whether a pipeline will spill, but when, and once again, TC Energy has made our case for us."

TransCanada Energy said federal officials will analyze the pipeline and that it will conduct an internal investigation. In the meantime, it's "establishing air quality, water and wildlife monitoring and will continue monitoring throughout the response." Rockeman said the state's Department of Environmental Quality is on the scene to oversee cleanup and remediation efforts.