Keystone Failure In Senate Only A Temporary Setback 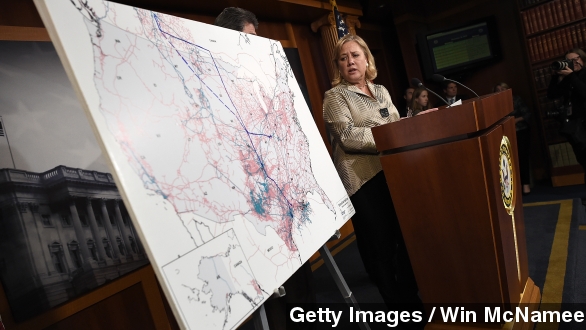 SMS
Keystone Failure In Senate Only A Temporary Setback
By Christian Bryant
By Christian Bryant
November 18, 2014
Although Louisiana Sen. Mary Landrieu and Keystone supporters failed to get the bill passed, the incoming Republican-led Senate plans to vote again.
SHOW TRANSCRIPT

It's been a political lightning rod for the better part of a decade, but Tuesday was the first time the plan to build the Keystone XL pipeline was put to a vote in the Senate.

Democratic Louisiana Sen. Mary Landrieu forced the vote, which had been in limbo for six years. Landrieu, who is in a close December run-off election, said she felt confident she could get the 60 votes needed to get the bill passed — but was short by one. (Video via C-SPAN)

Despite the Keystone vote's failure, it's uncertain if the bill would've gotten the president's approval. As recently as last week, White House Press Secretary Josh Earnest suggested President Obama would not sign the bill until the U.S. State Department submitted its review on the Keystone XL project.

But even though the bill fell short of 60 votes this time around, most analysts predict it's only a matter of time before it gets approved.

"Republicans taking over the Senate in January. They are going to have the 60 votes they need in all likelihood." (Video via Al Jazeera)

Kentucky Senator Mitch McConnell, who is the incoming majority leader, said after the vote he looks forward to Senate taking up and passing the Keystone bill sometime early next year.

So, the vote itself only delays another Keystone battle in the Senate, but it is also seen as a political setback for Landrieu — one that probably won't change the outcome of her upcoming run-off, according to some.

STEVE HAYES VIA FOX NEWS: "I don't think it ultimately matters much. I don't think she was going to win whether it passed or didn't pass."

A New York Times writer echoed that sentiment, saying, "​Ms. Landrieu is all but doomed, and even a successful Keystone vote would have been too little too late. ... [Her] problem isn’t whether voters believe she can pass Keystone. Her problem is that the coalition that used to elect Southern Democrats like herself no longer exists in Louisiana."

The House passed a bill approving construction of the pipeline last week. The 114th Congress gets to work Jan. 3, though it's uncertain when the Senate will once again take up the Keystone bill.

This video includes images from Chesapeakeclimate / CC BY SA 2.0 and Getty Images.