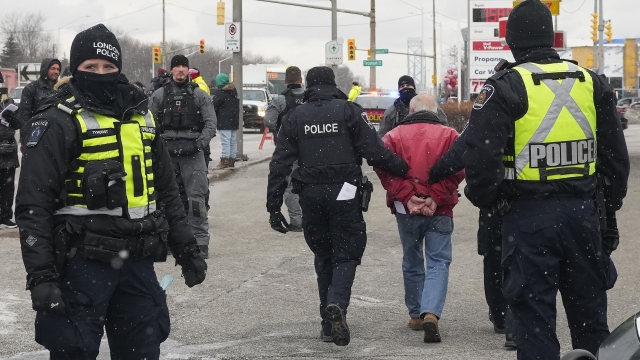 The busiest U.S.-Canada border crossing was open Monday after protesters demonstrating against COVID-19 measures blocked it for nearly a week, but a larger protest in the capital, Ottawa, persisted as city residents seethed over authorities' inability to reclaim the streets. 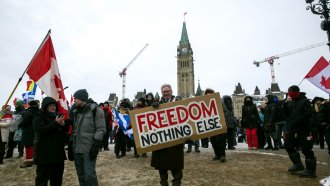 Demonstrations against virus restrictions and other issues have bottled up several crossings along the U.S.-Canada border and hurt the economies of both nations. They also inspired similar convoys in France, New Zealand and the Netherlands. U.S. authorities have said that truck convoys may be in the works in the United States.

Police in Windsor, Ontario, arrested 25 to 30 protesters and towed several vehicles Sunday near the Ambassador Bridge, which links Windsor — and numerous Canadian auto plants — with Detroit. The bridge, which carries 25% of all trade between the two countries, reopened to traffic late Sunday night. 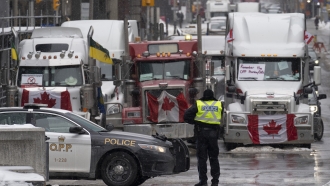 After protesters began blocking bridge access Feb. 7, automakers began shutting down or reducing production at a time when the industry is already struggling with pandemic-induced shortages of computer chips and other supply-chain disruptions.

About 470 miles northeast of Windsor, the protest in Ottawa has paralyzed downtown, infuriated residents who are fed up with police inaction and turned up pressure on Prime Minister Justin Trudeau.

Trudeau planned to meet virtually with the leaders of Canada’s provinces on Monday morning, as well as with lawmakers.

Mayor Jim Watson said Sunday that he agreed to meet with demonstrators if they confined their protest to an area around Parliament Hill and moved their trucks and other vehicles out of residential neighborhoods by noon Monday. He shared a letter from one of the protest’s organizers, Tamara Lich, in which she said demonstrators “agree with your request” to focus activities at Parliament Hill.

But Lich later denied there was an agreement, saying in a tweet: “No deal has been made. End the mandates, end the passports. That is why we are here.”

The media lies to their viewers. No "deal" has been made. End the mandates, end the passports. That is why we are here. #Freedom #Truckersforfreedomconvoy2022 #FreedomConvoy2022 https://t.co/5uTEnm0wZ7

While the protesters are decrying vaccine mandates for truckers and other COVID-19 restrictions, many of Canada’s public health measures, such as mask rules and vaccine passports for getting into restaurants and theaters, are already falling away as the Omicron surge levels off.