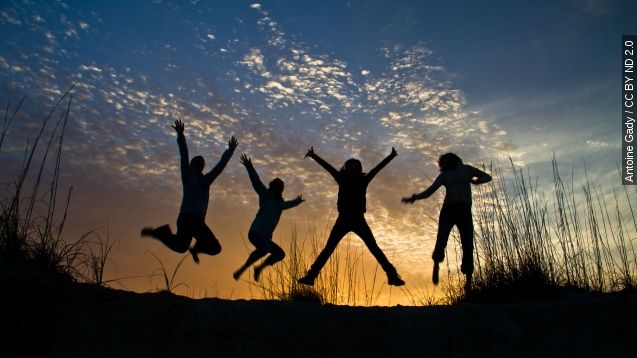 SMS
Key Ingredient To New Year's Health Goals: Friends
By Meredith Miles
By Meredith Miles
January 11, 2016
According to a new study in Proceedings of the National Academy of Sciences, a strong social network appears to play a key role in physical health.
SHOW TRANSCRIPT

It's normal to feel sluggish after the holidays, and with the New Year's resolutions swirling, 'tis the season to kick health goals into high gear. But before you grab that green juice or latest herbal supplement, consider calling your BFF instead.

According to a new study in Proceedings of the National Academy of Sciences, researchers are finally starting to unravel the different ways strong friendships can affect your physical health.

Researchers looked at health data from more than 14,000 Americans ranging from adolescence to old age. They found people who had fewer social connections tended to score worse on some of the most common health measures like BMI, blood pressure and waist circumference.

Exactly why friendship is so beneficial to physical health is still unclear, but the findings revealed that the health impacts last our whole lives.

For example, a poor social network among adolescents raised the risk of inflammation to roughly the same degree as lack of physical activity.

And social isolation in old age appears to be worse for your blood pressure than having diabetes.

In other words, it goes without saying that BFFs are important for mental health, but focusing on friendships as a health resolution for the new year should probably be among your top priorities.