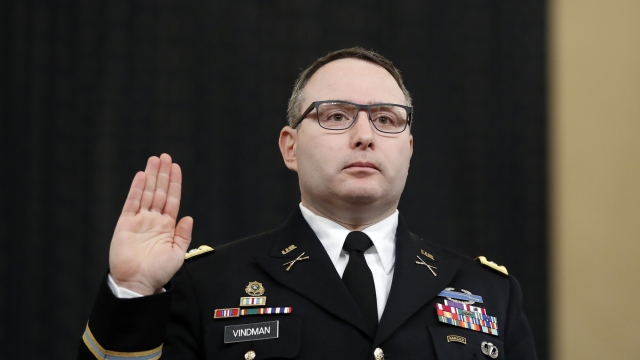 Lt. Col. Alexander Vindman, a key witness in President Trump's impeachment inquiry, has announced his retirement from the Army after more than 21 years of service.

According to The Associated Press, Vindman's lawyer said he was retiring after it became clear Vindman would not be able to further advance his career. The lawyer said Vindman endured a "campaign of bullying, intimidation and retaliation" by the Trump administration.

Vindman previously served as the top Ukraine adviser on the National Security Council but was fired by President Trump in February after testifying before Congress.

He told lawmakers, in part, that he had raised concerns internally about President Trump's phone call with the Ukrainian president about an investigation into Joe Biden and his son. His testimony was sharply criticized by President Trump, who called him "insubordinate" in a tweet.

Vindman served in Iraq and received several honors during his career, including a Purple Heart. His retirement still has to be approved by the Army, and the process usually takes months.

Additional reporting by Jill Colvin and Lolita C. Baldor of the Associated Press.