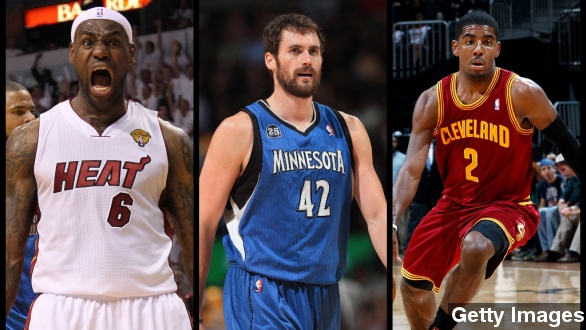 By Jamal Andress
August 7, 2014
The powers that be continue to shift in the NBA's Eastern Conference with news that three-time All-Star Kevin Love is heading to Cleveland.
SHOW TRANSCRIPT

The powers that be continue to shift in the NBA's Eastern Conference with news that three-time All-Star Kevin Love is heading to Cleveland to join NBA champion LeBron James and Cavaliers superstar guard Kyrie Irving.

The trade was first reported by NBA insider extraordinaire Adrian Wojnarowski, who tweeted 2013 and 2014 No. 1 draft picks Anthony Bennett and Kevin Love were headed to Minnesota in exchange for the the All-Star.

"Probably the worst-kept secret in the NBA!"

"Well, we've been hearing about this for weeks."

But despite news of the potential trade spinning on the rumor mill for quite some time now, the trade cannot be finalized until Aug. 23, when Andrew Wiggins is eligible to be traded.

If the trade does go through, Cleveland will undoubtedly have the most firepower in the Eastern Conference and probably the NBA.

LeBron James, Kevin Love and Kyrie Irving average a combined 73 points, 22 rebounds and 16 assists per game, making the Cavs the new "Big 3" in the East.

The major contenders left in the East include the Indiana Pacers, Miami Heat and, most notably, the Chicago Bulls.

In one of the most unfortunate injuries of the year, Paul George, the Indiana Pacers' leading scorer, broke his leg during a Team USA scrimmage. That injury will keep him sidelined for the entire 2014 season.

Indiana also lost its spark plug Lance Stephenson to free agency. He signed a three-year deal with the Charlotte Hornets. Stephenson and George made up two of Indiana's top three scorers. (Video via Indianapolis Star)

Three-time champion Miami Heat is in better shape but is obviously missing a pretty big part of the puzzle. With King James gone, the Miami Heat will be leaning on the production of Chris Bosh and a much older Dwyane Wade, who was the Achilles heel during the NBA Finals.

Which leaves the Chicago Bulls. Although they could not corral Carmelo Anthony into a deal, they do have Derrick Rose finally returning.

"What should we realistically expect from Derrick Rose?"

"I'm firmly in the cap that Derrick Rose is going to return to an elite level player."

The Chicago Bulls have also added All-Star and NBA champion Pau Gasol, who is expected to bring a desperately needed inside presence.

But most sports reporters say that won't be nearly enough to contend with a new and improved Cavaliers team sporting three All-Stars in its starting lineup.

Kevin Love's new deal with the Cavs is reportedly worth $120 million over five years.