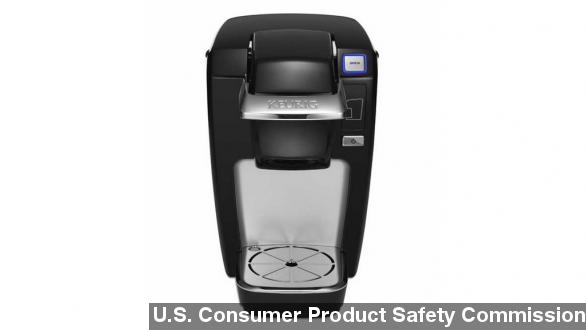 Single-serving coffee company Keurig will repair its Mini Plus brewers sold between 2009 and 2014 after reports of hot water spraying from the device.

A handful of Keurig owners ready to wake up to the company's one-serving cup of joe woke up to a scalding-hot sting instead.

Now the coffee brewer is recalling some of its Mini Plus Brewing Systems due to a possible burn hazard. The U.S. Consumer Product Safety Commission warns, "Water can overheat during brewing, spray out and burn consumers."

By the numbers, the recall affects more than 7 million units sold in the U.S. and Canada. So far, customers have filed 200 reports claiming hot liquid escapes the machine, and 90 have reported burn-related injuries.

On its website, Keurig explained the recall was voluntary. The coffee-maker also tried to pinpoint a possible cause, saying, "Keurig has determined that this event is more likely to occur if the brewer is used to brew more than two cups in quick succession."

In other words, addicts slurping down coffee in succession or someone trying to brew a family-sized pot out of single-serving cups could put you at risk.

According to Fortune, the company's biggest moneymaker is its single-serving instant coffee packs. Its brewing machines only brought in around $823 million last year while the cups accounted for $3.6 billion in sales. (Video via Keurig)

Recalled machines sold between the end of 2009 and July 2014 have a serial number beginning with 31. The company is asking consumers to contact Keurig for a free repair.

A Chicago native whose full-time and part-time jobs keep him up at night. He’s the curator of the self-proclaimed Best Spotify Playlist in the Office — follow it @ “BEATS/Scenes.” Newsy utilizes his creative side to brand new video, web and mobile designs as well as his pop culture addiction to write about technology and entertainment. @erikshute