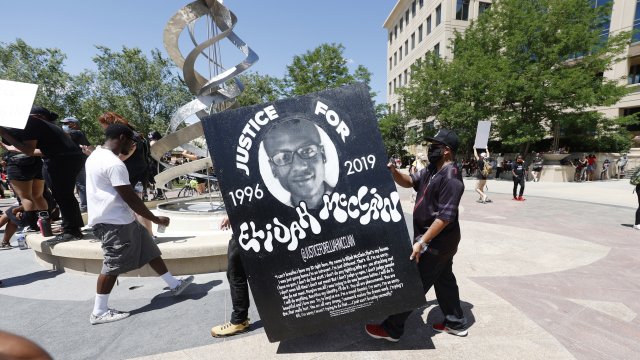 Five first responders who struggled with Elijah McClain, a 23-year-old Black man, prior to his 2019 death are scheduled to be arraigned Friday on criminally negligent homicide and manslaughter charges.

The defendants are three men who worked as Aurora Police Department officers at the time - Nathan Woodyard, Randy Roedema and Jason Rosenblatt - and two who were Aurora Fire Rescue paramedics - Jeremy Cooper and Pete Cichuniec. Each is accused of “unlawfully, feloniously, and recklessly” causing McClain’s death.

Roedema, Rosenblatt, Cooper and Cichuniec also face second degree assault and crime of violence charges, according to the indictment.

Police responding to a 911 call that McClain looked "sketchy" pinned him to the ground while paramedics sedated him with a ketamine injection.

An amended autopsy, released publicly in September, blamed “complications of ketamine administration following forcible restraint” as the cause of McClain’s death.

Ketamine has many medical uses, including during hospital anesthesia procedures, but in recent years paramedics around the country have been using it as a sedative to calm agitated people in pre-hospital settings.

According to internal videos obtained by Newsy, the medics said they administered the drug because McClain exhibited symptoms of an agitated condition for which medical protocols suggested utilizing the drug.

“I thought that he was in the excited delirium protocol that we follow,” said Jeremy Cooper, the paramedic who administered the drug. Cooper described McClain as “pouring sweat” and “hyperaggressive.” He also said McClain was “certainly not compliant with the officers and seemed to have strength that was not normal strength.”

After McClain’s death, Colorado’s state health department stopped allowing medics to administer ketamine to sedate agitated people in pre-hospital settings, while the state legislature passed a new law significantly limiting how the drug could be used by paramedics when police are also on the scene.

“I think the case is extremely important with regards to the fact that there’s criminal charges associated with what may or may not be medical malpractice,” said Scott Sholes, the president of the Emergency Medical Services Association of Colorado.

Sholes said he was unaware of other high-profile cases in which paramedics were criminally charged for making decisions related to medical protocols.

“This is a very challenging situation, I think, for any of us who watch what happens with regard to medical error,” Sholes said.

“I think to some extent, it is a little bit of a scary feeling for anyone in medicine because we can make mistakes, and I’m not saying that mistakes were made in this case,” he said.

“Criminal charges have the potential to drive reporting underground or not at all, and so that’s what’s fearful, I think, to many EMTs, paramedics, and other medical providers when you see criminal charges come into play,” Sholes said. “Now, certainly, we see cases where it makes sense. I’m not sure that that’s the situation here, but any time this happens, we set ourselves up to step backwards in how we address medical error.”

Despite the finding, the death of Elijah McClain, a 23-year-old massage therapist, was still listed as undetermined, not a homicide.