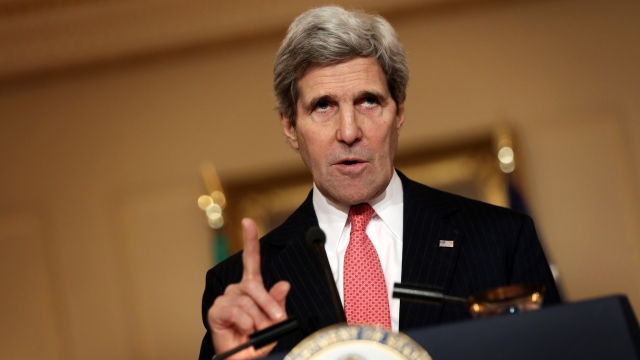 On Thursday, U.S. Secretary of State John Kerry slammed Syrian President Bashar al-Assad, his regime and its allies for the bloody five-year war in Syria.

"There is absolutely no justification whatsoever for the indiscriminate and savage brutality against civilians shown by the regime and by its Russian and Iranian allies over the past few weeks or indeed over the past five years," Kerry told reporters.

Kerry's comments came as a cease-fire appeared to be holding in Aleppo — a day after a previous one broke down.

It's believed about 50,000 civilians are still trapped in the eastern part of the city. Some had posted pleas for help and goodbye videos online.

According to Kerry, 21 buses and 19 ambulances had successfully reached a checkpoint Thursday. They were expected to carry 1,000 people to the Turkish border.

However, Kerry said the department had also heard reports that regime forces or its allies had fired on a convoy carrying injured people.

"We remain deeply concerned, as well, that Syrian men between the ages of 18 and 40 who have apparently been detained or conscripted into military service when trying to pass through military checkpoints, and that some who of these actually went missing days or even weeks ago and we still don't have — families don't have, their loved ones don't have accountability for what has happened to them," Kerry said.

Kerry said a cessation of hostilities in Aleppo is necessary in order to move on to a national cease-fire and potential peace talks.

He called for a cessation of hostilities among all parties, safe passage for civilians and fighters who want to leave Aleppo and access to humanitarian supplies across Syria.

"With these steps, we are convinced that the killing and the suffering in Syria can stop, and it could stop very, very quickly if Russia and the regime made the decision to do so," Kerry said.

He said even if Aleppo falls to the regime, the war won't be over.

He said every stakeholder he has spoken with is prepared to resume the peace talks that took place in Geneva, Switzerland, earlier this year. He said it now depends on the "Syrian regime with Russia's support."

"So let's be crystal clear about who bears responsibility for what we have seen and what we are seeing and continue to see in Syria," Kerry said. "We have witnessed indiscriminate slaughter, not accidents of war, not collateral damage but frankly, purposeful — a cynical policy of terrorizing civilians."